One of the oldest buildings on campus

So few admissions reps take the time to hone in on what makes them different from their competitors, so I was impressed that the rep took the time to address differences between Gettysburg and other nearby liberal arts schools. She also took the time to personalize the discussion based on what the students were interested in; this was one of the least-scripted/canned talked I’ve attended. 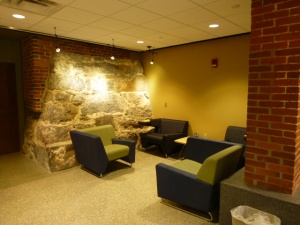 Although buildings have been renovated/updated, they’ve kept as much of the original structure intact

One of my students asked about diversity on campus; later I asked what the best change had been since she arrived on campus. Her answers built on each other: “We’re not the preppy school anymore. Nine years ago, students did kind of look alike. It’s just not that anymore. The diversity of types of students here is the most positive and noticeable shift I’ve seen.” Diversity is still an “active discussion topic at small Liberal Arts colleges. Most of us care about diversity. What it boils down to is that we’re still largely American Caucasian.” Right now, they pull in 7% of their population from abroad, but more this year’s freshman and incoming classes are higher. Another 15% self-identify as domestic students of color. About ¼ come from PA. Politically, students are pretty evenly split across the spectrum. There are active Muslim and Jewish populations. “We have a lot of types of diversity, and it’s growing.” 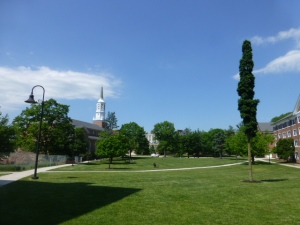 The college is holding steady at 2600-2700 undergrads: “It’s just big enough that you’ll know some people really well; other people will show up at graduation and you’ll realize you’ve never seen them before.” This happens despite being a completely residential campus. Placement in the freshman dorms is determined by the First-Year Seminar students enroll in. After the first year, students have lots of housing options. There are theme houses (entire homes) for interests such as Science, Blue Note (music), and the Civil War. They have also bought what used to be hotels that are currently used as dorms. Food is good; we ate at one of the “Grab-and-go” options, and the students all liked the food, saying it was better than the food from the full dining hall at another school we visited. They’re currently gutting part of union to make room for more food options, and the Dining hall is being added onto.

The library where snacks are served during finals to keep kids going!

Gettysburg’s academics don’t disappoint; the top 5 Academics are ranked on par with Dartmouth. Our tour guide turned down an acceptance from Cornell to come here. “There hasn’t been a day that I haven’t thought this education was worth it.” A few academics of note include:

The Honor Code mostly focuses on academic integrity but also how students interact with each other. Things can be left in the library and not touched. Students look out for each other, and even after graduation, people help others out: they have the same number of alumni connections as Notre Dame. Traditions are tightly held here. A big one is attached to Pennsylvania Hall (one of the oldest buildings) on campus: during Orientation, students file up the stairs and through the building to the other side; on Graduation Day, they do the reverse of this. During orientation, they also walk as a group to the cemetery (a mile away) where Lincoln gave the Gettysburg Address. Campus sits right in town within walking distance to downtown and parts of the battlefield. Town is unique in that there are 2-3 million visitors here every year. Freshmen can’t have cars on campus unless they’re on the Equestrian Team which practices about 15 minutes south of campus.

The original building on campus and one of the haunted buildings; students graduate on these steps.

Gettysburg ranks on several Top 10 Most Haunted campus lists. Pennsylvania Hall was used as a Civil War hospital, so it (along with many other buildings on campus) has its share of ghost stories, including people taking the elevator to the basement and seeing the hospital and doctors when the doors opened.