Archive for the category “Montana”

UMW is unique in the Montana system in that classes are offered on the block schedule; in this way, they’re very much like Colorado College or Cornell College. Students take one class at a time, three hours a day for 18 days. Classes meet either from 8:15-11:15 or from 12:15-3:15, and the students may NOT take 2 classes during the same 18 day block. At the end of the block, they get two extra days off (so a four-day weekend) and then will start their next class. Classes are capped at 25 with an average of 18.

Half the students are in Education, but Business and Biology are also popular. Geology is the most prestigious, and Natural Horsemanship is the most unique.

This is a small, compact campus with 1400 undergrads. Almost 2/3 of the students are from Montana. For those flying in, Bozeman is usually the most convenient (more flights), but Butte is closer (60 miles). The drive from Bozeman is an hour and 45 minutes. There is definitely a rural feel with the school located near Continental Divide and Ranches. Freshman must live on campus.

Montana Tech mirrors Colorado School of Mines for engineering. It is specifically a STEM institution with 3000 students. Their mission is to help students from wherever they are; if they come in with less math than they need, they will provide the resources and help for students to catch up and have a decent amount of success with this: students who come in ready with only College Algebra rather than Calculus have a 60% success rate in their engineering program. Job placement is high with a 96% career placement over 10 years (with 99% of alum responding).

They offer programs on two campuses: a two-year degree campus (which offers programs like metals fabrication) and a four-year campus with programs like mining and lots of engineering programs like environmental, petroleum, geophysical. These last two programs are also the two most recent doctoral degree programs. The university is located in Butte, a mining town. It’s described as blue-collar, historical, friendly, and proud. Students are primarily from Montana (80%); 8% of the population are international. Surprisingly, the gender imbalance is not as pronounced as might be expected given the type of school: only 59% of the students are male. There are also no fraternities or sororities.

I would expect that the CIA would recruit at campuses in DC or at some of the big name schools; MSU was NOT one I expected to be on the CIA’s radar – but it is. Because of the strong Arabic program and the study abroad program in Morocco, the CIA, the Department of State, and other similar agencies regularly recruit MSU students. As part of their commitment to helping students find jobs, MSU host two career fairs a year (including the largest west of the Mississippi). More importantly, they’re invested in providing the students with a good education with a lot of support added to the end game of who they are getting connected with.

The university and surrounding area

MSU has started a major initiative to increase retention through community building initiatives and support systems. In the last two years, they’ve raised retention to 74.2% with a goal of 82% by 2014. However, four-year graduation rates still tend to be on the low side (a little over 50%) but they’re working on increasing this, as well. They’re looking at how students make the transition to college and develop ways to cope with all the newness of being a university student, how to be a citizen of the MSU academic community, and how to be an engaged Bobcat. They have implemented a First Year Initiative (a first year challenge which includes photo scavenger hunts and earning points that they can use around campus for food or at the bookstore). They are starting a Second Year Initiative, since the first two years are when students are most likely to leave. One of the best things they’ve started is a new policy stating that anyone who left MSU and did not attend another institution is invited to come back.

All freshmen live on campus, as do many of the upperclassmen. During the Montana tour, we spent 3 nights in a 3-floor traditional-style (bathrooms down the hall) freshman dorm that. The rooms were relatively spacious with comfortable beds and lots of storage space. The cool thing is that students can paint the rooms any color they want; mine was a cheery yellow and green combination. The bathrooms were large and had enough showers to handle the group. Although there were over 50 rooms to a floor, the building didn’t feel that large because it was set up in a square with a courtyard in the middle. Each floor had a large tv lounge, and the first floor had more lounges, a 24-hour reception desk, and a dining hall. There are several options for students after the freshman year such as suites for upperclassmen, 21-and-over halls, and Greek Houses. The Greek system is very small (only 4% of the student population) with four sororities and seven frats. The houses are involved on campus and dedicated to tradition. They get involved in homecoming and giving back to campus and community – every house raises money for a particular charity.

Another way they have built community is through the required University Seminar in which students participate in small group discussions about the common books they all read. Since all students read the books, it gives them all a common ground for discussion out of the classroom as well. Upperclass

The physics professor getting a cinder block broken on his chest with a bed of nails underneath him. Why? To illustrate force and different laws of physics.

student leaders get credits for leading the classes. However, this is not to the detriment of face-time with faculty. One of the tour guides told us that the “faculty really believe and invest in us.” We got treated to a 30 minute “Sample Physics Class” which was the most entertaining and informative things I’ve seen in a long time! The professor was funny and explained things so well. I wish I could have taken a full class with him!

Duck pond in the middle of campus

The student activities board and by the student life department host lots of on-campus activities, including speakers and performers, and students take the initiative on many of these, including throwing PowWows to celebrate the heritage of the Native American students on campus. School spirit is huge, and the Cat-Grizz (MSU-UM) game is as big here as it is on the UM campus. Football (in which they’ve been Big Sky Conference champs on multiple occasions) is only one of fifteen DI sports. Off campus, there are three easily accessible world-class ski areas within an hour (Bridger Bowl is 20 minutes away); kayaking, hiking, and other outdoor activities are also popular. This is much more of a skiing community than Missoula because Bozeman tends to get more snow. Bozeman is also a smaller city than Missoula so it is a little more compact and community-oriented. Town-gown relations are good. One student talked about how local businesses paint their windows blue and gold during homecoming. 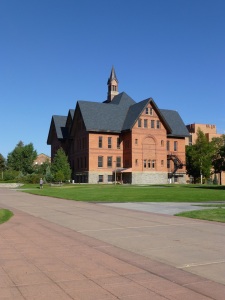 Campus is very attractive with lots of brick and open space. There is a nice mix of older (but well maintained) buildings and new construction. The students and admissions people only cited a couple problems with the university; parking, as usual, seems to be an issue, but again, this is relative. It’s nowhere near the problem I’ve seen on a lot of campuses. The second issue brought up was that of the growing student population. Enrollment has increased, including lots of out of state students which is an “interesting challenge for infrastructure, access to classes, space, etc.” There are some creative solutions like changing around T/TH class times to fit in another class at the end of the day to make sure that students are getting into classes they need, again indicating that the administration is listening and responding to issues.

MSU has several programs of note: 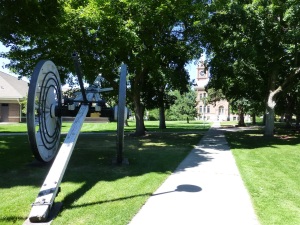 UM has a classic university feel with big brick buildings and a large oval quad; it’s not only a beautiful campus, but it’s a manageable/ walkable size and it all seems to fit flow. As part of the counselor tour, we stayed in one of the traditional dorms for the first 3 nights. The rooms are a bit on the small side, but certainly livable. However, there was always a rush on the bathrooms which didn’t seem big enough to take care of the needs of the population on the hall. Some of the rooms were traditional doubles, and others were set up in “pods” – a common room with three single rooms off of it. None of the rooms had sinks, but the common rooms of the pods had a small fridge and microwave. None of the residential halls had AC, which students sited as one of the things they would change if they could. Only 2 of the dorms are higher than 4 floors, and all but 1 building are clumped together on one side of campus. 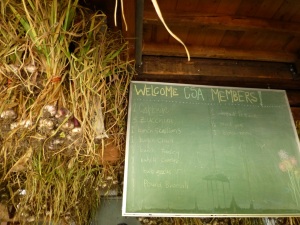 Sustainability and locally sourced food is a big deal here. They have a garden on campus, and the food goes to the dining hall. The PEAS farm, about 3 miles away, is used by the university. In addition to 90 CSA shares, they provide 15-20,000 pounds of food for food banks. They offer classes on the farm for the environmental science and agricultural students. The class can be repeated three times: spring, summer, and fall so that students get the full range of what happens on the farm. The man who runs the program wants it to be meaningful experience for the students, and he’s clearly passionate about what he does. The farm is not organic-certified, but it is an organic farm: “we wouldn’t be doing anything differently. We already willingly adhere to all the standards, and becoming certified costs a lot of money and makes me jump through hoops, requiring hours of paperwork that otherwise could be spent on the land.”

One of the biggest issues I saw was that this is a very white campus, although that mimics the town, as well. Native Americans make up the largest minority population, but even that is low – like single digits low. However, there are 500 international students from 75 countries; one of the students on the panel was from Kenya and when asked about winters in Missoula, she said, “if I can survive it, anyone can survive it!”

The main building with the M Mountain behind it.

Mostly, students are really happy here. There’s a lot to do on and off campus. The Grizz-Cat (UM-MSU) rivalry is huge, and the annual football game sells out. One student said “I don’t even like football, but I look forward to the game every year!” Tailgating is huge, and people get really pumped up. School spirit is huge, and they turn out for a lot of games in different sports. They also like the accessibility of skiing and hiking, but say that even non-outdoorsy people fit in and find a lot to do. The movie theater is in walking distance as are restaurants, the local ice cream place, and pubs. Shuttles run frequently. First Friday (open art galleries) is popular. One of the on-campus perks that got a big shout-out is that there are resident IT students on call four nights a week who can be called to help trouble-shoot printer, internet, or computer problems. The biggest issues that students complained about was the parking situation(but that takes on an entirely different meaning here than on a really large campus), and off campus housing can be difficult to find, but not impossible. Most students find things close enough to walk or ride bikes.

One of the first events we attended as a group was the Dean’s Panel where 9 Deans gave presentations about their respective colleges.