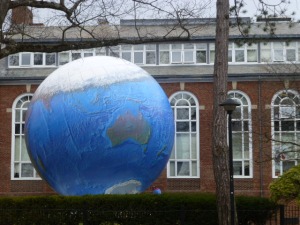 Because Babson was running an Admitted Student Day on the day I was visiting, I hadn’t registered for a tour. However, I was taking a late morning tour of Olin; the two campuses literally run right into each other, so it was easy to head onto Babson’s campus before checking in at Olin. Walking onto campus, I passed a huge globe outside one of the buildings. In the 80s, this was the largest rotating globe in the world (it’s no longer rotating). I learned later that the campus also has one of Newton’s apple trees which someone grew from a seed. As another fun fact, the students I talked to told me that one of Babson’s mistresses is buried somewhere on campus (although they couldn’t agree on whether she was a mistress, a wife, or a mistress-turned-wife). 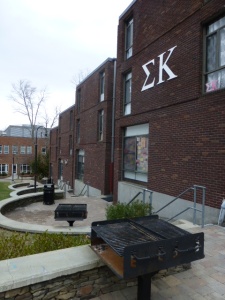 It was relatively early on a Friday morning, but there were several students out already (although it was far from hopping!). I stopped at a booth in a quad by several dorms to ask one of the students if I was on the right track to get to the Admissions Office; I ended up never leaving because the kids were talkative and interesting, and more than willing to share information about the school. It turned out that they were staffing a 24-hour BBQ booth, a biannual fundraising event run by a fraternity. They had already raised $1600, “plus the credit card sales which we haven’t tallied yet.” 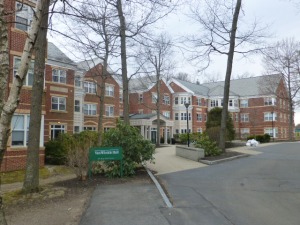 What surprised the students about Babson was the motivation and focus of the students, the diversity of the campus, and the networking opportunities. “Babson delivers.” All students graduate with a Bachelors of Science in Business and can choose a concentration (or not – the senior I spoke to doesn’t have one). They all raved about their education. They love that all the professors have real-life experiences. A sophomore told me, “This is their retirement job. Lots of them still work or are on Boards. One guy flies in a couple times a week on his private jet just to teach class.” One of the girls (a freshman) said, “If your students want Accounting or Finance, send them to Bentley. Anything else, send them here.” This isn’t a traditional Business School; instead, it takes an entrepreneurial approach. “It’s a unique place; no other place lets you start your own business as a freshman.” One of the seniors I spoke to pulled out his business card and said, “If you have other questions or have students who want to email me, feel free!” I’ve never visited a school before where a student had a business card (a non-admissions one – this was for his own business!). 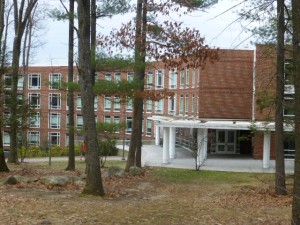 All first-year students take Foundations Management and Entrepreneurship (which ends up being the biggest class they take). They’re put into teams, taught how the basics of Entrepreneurship, and then they run a business for the second half of the year. They’re even given up to $3000 to start it. Proceeds from the business go to charity, and the group does community service for whatever group they’re donating money to. The freshman telling me about this program was in a group that created athletic shirts with iPod attachments. They had to do everything from the concept to the supply chain management to finding manufactures to HR. 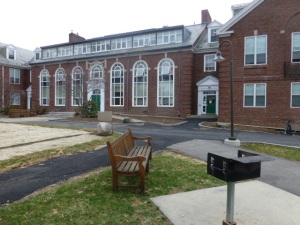 There were several other programs that the students shared with me. One was the Ultimate Entrepreneur Challenge that takes place in one class; the professor tells them that they have a week to get food for the class for free. The students have to figure out how to barter or in some way convince food providers to provide the food. Another is a travel program called BRICK which is a one-semester trip where students spend 4 weeks each in India, Russia, and China. Finally, they are part of a consortium with Olin (next door) and Wellesley (about 2.5 miles away). They’re allowed to take 1 class per term at one of the other colleges, and a fair number of people take advantage of this. One of the guys tried a class at Olin: “I was a sophomore and they put me in an upper level class; it blew my mind.”

Beyond the education, one of the things they like the best about Babson is that “It’s the perfect size. I can ignore people I don’t want to see but I can still meet people every weekend. The students who don’t want to socialize or who aren’t go-getters aren’t going to do so well here. “If they just sit in their rooms, they’ll be miserable.” They said that students may need to look a bit for activities: “they’re not going to be sitting there outside the dorm waiting for you – but they are there!” Winter can seem a little like a ghost town on campus because people tend to stay inside, but people do enjoy being out during the warmer months. However, there’s still plenty to do in the winter, including using the campus’ skating rink where students can rent skates (or use their own) during Open Skates. It’s also easy to get off campus: the commuter rail is about a mile and a half away, and the Green Line is 3 miles away. They’re talking about starting a potential bike share, and buses into Boston on the weekends are $5.

About 15% of students are Greek, and “Greek Row” is located in a dorm. The freshman I talked to isn’t part of Greek life and doesn’t feel like she needs to join to have a social life. “I can go to events if I want to.” Freshmen rush in the spring; transfers or upperclassmen can rush in the fall. A little more than 25% of the students are international or have dual citizenship. “You get to meet people from all over.” Many students stay on campus all four years, but they can move off if they want. The university owns two apartment buildings about a 10 minute walk away which is a nice “in-between step” for students wanting a little more autonomy but don’t want to move completely off campus. Students living there are the only ones who can go off the meal plan. Most of the kids agreed that the campus food leaves a lot to be desired. A sophomore said, “Expect to be disappointed with the food” – but they’re changing vendors, so they’re hopeful that it’ll get batter. A freshman told me that she as on a task-force talking about the food. “I told them that if it doesn’t get better, we should be able to go off the meal plan. I eat out a lot, and if I’m spending this much for school, I should be able to get a decent meal without spending more money.”