Archive for the tag “Purdue University”

Twenty-three astronauts, including Neil Armstrong (for whom their engineering building is named), graduated from Purdue.

Purdue is Indiana’s land-grant public institution, home to 29,400 undergraduates: 57% are male, 57% are in-state, and 17% are international. We visited on a drizzly day, but the students were out in droves. The level of diversity seen in the student body impressed me.

As part of the counselor tour, some of us chose to ride the “Boilermaker,” a small “train” that goes around campus. We had about five minutes to talk to the students who ranged from sophomores to seniors. Most were in-state; 2 were from other Midwestern states. They were all thrilled with their education and excited to talk about their experiences. One student said that she was surprised at how manageable the campus felt for such a large school; the others agreed that it feels small quickly through the majors, living communities, clubs, etc. Three were involved in Greek life (about 20% of all students are, making it one of the largest Greek systems in the state). The unaffiliated ones didn’t feel left out of the social scene or pressured to rush.

A few things the students particularly like about Purdue are:

There is no residency requirement but almost all freshmen live on campus. “It cuts in half about every year after that,” said the tour guide. A total of 11,500 students live in one of 16 dorms or a learning community (each housing 30-40 students) A new Honors College residence hall is about to be built. Greek housing is cheaper than other on-campus housing. 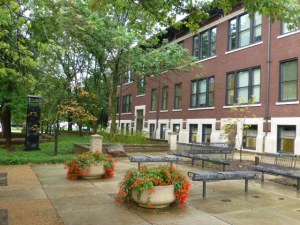 Students can be directly admitted to most of the 200 majors; undecided students enter the Exploratory Program. Many of the programs are largely hands-on with the goal of graduating marketable students. The admissions rep talked about their 4-3-2-1 “program” (although it’s not really advertised as such): they want students to graduate in 4 years, keep a 3.0 average, complete 2 hours of study for every hour of class, take 1 leadership role. The university boasts the largest student-run job fair in the country, and students do tend to transition easily into the job market. Our tour guide, an agri-business major, has a job already lined up for graduation (almost a year away!)

Classes tend to be large. There are 2 lecture halls with 470ish seats and other halls that hold 120 students. Our tour guide’s smallest classes were 30 (Instructor-led) and 20 (TA-led). There’s support for people who want it, but no one will hold their hands. The OWL lab (writing center) is free. “It’s available online; I used it even as a high school student,” said the tour guide. However, other tutoring costs money.

During our visit, there were two sessions where we had options of seeing several different departments. I first went to the anthropology department and got a tour by one of the archaeologists who works in Egypt. She took us into the osteology lab where a several-thousand-year-old Sudanese skeleton was assembled on the worktable. She showed us some of the discoveries about lifestyle, and explained what type of work the students do in the class she teaches. Eventually it will go back to Sudan, but since they don’t have facilities to store human remains for study, they’re not anxious to get it back.

One of the kitchen classrooms for the Hospitality School. 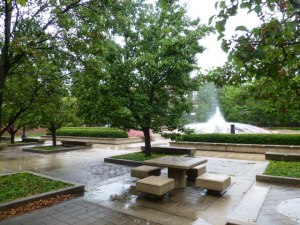 The second tour was the school of Health and Human Sciences. This encompasses everything from Hospitality and Tourism Management and Consumer Science to Nursing, Psychological Sciences, and Speech, Language, and Hearing Sciences. I talked to a Dean and a current Hospitality student. He showed off the school, including the sit-down restaurant on campus where all students must complete an internship. 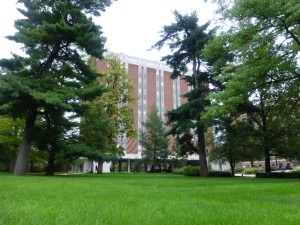 Students must apply by November 1 to be eligible for scholarship money. They will superscore the SAT or take the highest composite ACT. They only need 1 recommendation letter which can come from the high school counselor.