Archive for the tag “Industrial Design”

A view from one of the tall buildings on campus with classrooms, admissions, and administrative offices. The university is integrated right into Bridgeport.

This is one of the most racially diverse campuses I’ve visited, and I learned from the admissions rep that they’ve been ranked 17th in the country for diversity. Both the admissions rep and the tour guide talked about the racial and geographic diversity represented on campus; 20% of the population is international, as well. The tour guide was proud to be part of such a community, and felt that people really got along; rather than being cliquey, people were open with each other. However, he was less able (or maybe not as comfortable) answering questions about religious and LGBTQ diversity and acceptance on campus. He did tell me that there were some clubs on campus for different groups, and I was glad to see several women wearing hijab.

People are really connected and seem to work together. “I don’t know what causes that, other than it’s an open and welcoming community,” said the rep. “It really sets them up to succeed in the workforce when they’ll be working with people from all over.” Part of this may also stem from the fact that campus is integrated into the surrounding community without much of a centralized campus or quad. Bridgeport is a largest city in Connecticut with lots of Fortune 500 companies and other perks of living in a city. (It’s also the 2nd largest Park City … only Paris beats them on this front!) 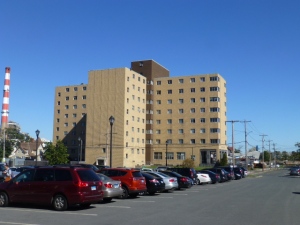 The biggest dorm on campus

About 60% of students live in the 4 res halls, many with specialized floors including Freshman Achievement and Community Service. A great, unusual feature is that students get a free Knightflix account with new movies every month. Unless they’re commuting from home (and there is a decent commuter population), students live on campus for the first 3 years. Once they’re 21 or have 90 credits, they can move off. All students can have cars on campus for free. There are also UB shuttles and the public transportation is free with student ID. The MetroNorth train station is 5 minutes away; from there, Grand Central is an hour away.

This is a career-focused university with lots of internationally focused majors. Many of the faculty have real-world experience. My tour guide’s Intro to Criminal Justice class (also his smallest class with 18 students) was taught by a lawyer; he loved the stories the professor told in class and how relevant the topics were. Classes average 20-25 students; the tour guide’s largest class, Art History, had 80 students. He loved his Abnormal Psych class (and was excited to tell me things he learned) and Criminology.

A mural painted by a Cuban student to depict the history of the city and the university. PT Barnum (once a mayor of the city) is on the right.

A few programs to mention include:

One of the green spaces on campus

“This is an events-based campus with at least 3 or 4 a day. They had 692 events last year,” my tour guide told me. They have 13 DII teams; Southern Connecticut State and American International College are big rivals. Students get really involved in things like MUN (which competes nationally and tends to do well), Student Government, and Student Activities Board. Students who hold formal leadership positions (study body president, etc) get a scholarship from a fund set up by alumni. 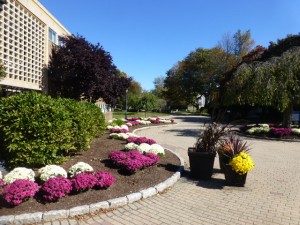 A walkway between academic buildings

The university is working hard on improving retention which was at 54% last year. They hired new retention specialist and new provost. Students who aren’t as prepared as they should be can be accepted into a pre-program; the president is committed to working with those students, and they understand that this often causes retention rate to take a hit. Interested students can apply to the Bridge Program that allows students to complete their FYE and Freshman Comp over the summer. This past year, they accepted 50 students and are hoping to grow it to 75. Students pay only $200 which covers everything including tuition and housing.