Archive for the tag “Indigenous Studies”

I was more impressed with Pacific than I thought I’d be. The campus is beautiful, and they’re clearly a student-centered institution. Two professors (David DeMoss, Dir of Arts and Humanites, and Sarah Phillips, Sociology professor) talked to us; both were engaging and personable. “I wanted to be somewhere where I could teach. I value the messiness of learning and the time spent sitting and talking with students,” said Dr. DeMoss. He went on to say that the Pacific kids were some of the kindest and most honest students he’s met; Dr. Phillips agreed. 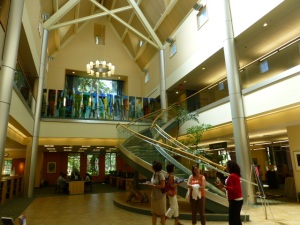 Interior of the library

The school’s specialty is letting students pursue what they’re interested in and teach them what they need to know to be successful. For example, all pre-health students take an Intro to Health Professions class to help them figure out early if that’s really what they want (and a Career Component is 1 of 4 requirements that all students have to complete to graduate). Students who succeed are those who are willing to: 1) work. It’s not a cakewalk. If they’re not ready for hard work, this isn’t the place for them. 2) consider an alternative and are not “married to their prejudices.” They may leave with the same ideas, but they’ve had to think about them and choose them rather than just inheriting them. 3) get into extra-curricular activities right away. It’s ok to be quiet and shy but they have to be curious. 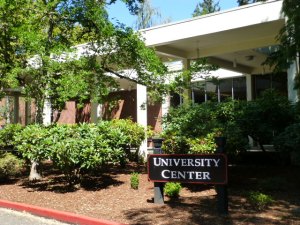 They have a few programs worth noting: They offer a 3-3 law program with Case Western Reserve in Ohio; Exercise Science is big; the English department offers a track in Creative Writing as well as an Editing and Publishing minor; Philosophy has an Ethics, Society, and Law track; they offer an indigenous studies as well as a peace and social justice minor; they have an accredited Bachelor’s degree in Social Work and are working on getting a Music Therapy program within the next couple years; finally, they have an Applied Theater major which I’ve never heard of before.

In their first semester, every student takes a First Year Seminar which usually has humanities-based content with a serious academic college-level bent. This is a 4-credit class with 16-20 students (plus an upper-level student mentor) who all live on the same floor, meant to help get students involved in social life. Our tour guide’s favorite class was “Global Sociology of HIV/AIDS.” Classes average about 19 students with the largest classroom space on campus holding 85.

Some of the newest apartments on campus

This is a largely residential campus of about 1600 undergraduates (they also have a sizable graduate population; they have the oldest – and one of only three – Optometry Graduate program on the west coast). Our tour guide didn’t like that the town isn’t so lively (although campus is), but said that there are good gown/town relations, and several places in town give discounts to the students. She goes to Portland maybe every 4-6 weeks; they can grab a on the corner by campus; the ride to the MAX line takes 15 minutes. From there, they can get downtown in less than 45 minutes (airport is about an hour); the trip costs $2.40 total. Pacific also has 4 zip cars which cost $60 a day to rent. 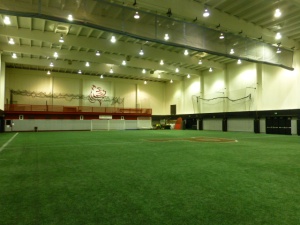 Pacific takes the Common App and it’s free to apply if they contact their admissions rep who waive the fee for them. Students need a 3.0 in prep classes and a 1000 CR&M SAT score or 21 ACT. Those who fall under these benchmarks go to a faculty Review Committee. There are several scholarships in areas like music and theater; students don’t have to major in these areas, but they do need to participate in ensembles, plays, etc. Pacific also holds a competition in February called Pace Setters in which students compete for more scholarship money. They get $2000 for competing, and can get up to $5000. If they matriculate, they get some of their travel money reimbursed. They also have a lot of support – financial and on-campus – for First Gen and low-income students. 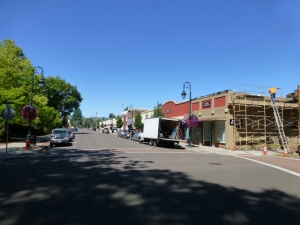 One of the streets leading off campus with cafes and shops

Located halfway between Portland and the coast, Pacific was founded in 1849 along the Oregon Trail for children orphaned on the trail. There are several old, historic buildings, including a Carnegie Library. The Cuppola of one of the original buildings still has the bell in it; this is where students “sign, shake, and ring” during orientation and right before graduation, marking the start and end of their time at Pacific: they sign the book, shake the President’s hand, and ring the bell. Although there are older, historic buildings, they’ve also done a lot of building and updating: they have a new eco-friendly upper-division dorm, and they’re working on renovating one first-year dorm, and knocking down and rebuilding another one. 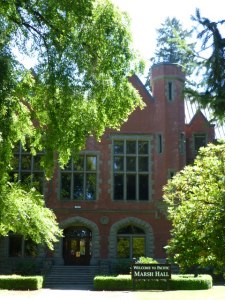 Pacific has a high percentage of Hawaiian (and more generally Pacific Islander) students. One of the major events that students mentioned looking forward to every year was the Luau that’s thrown every year. Sports are also relatively popular, and they have a lot of options, including Rugby as a club sport. Technically, Rugby is a men’s sport but since they don’t yet have a women’s team (they’re working on that), about four or five women will practice with them (but can’t yet compete). Students can take advantage of a lot of outdoor activities, much of which is organized through “Outback,” their outdoors activities group. 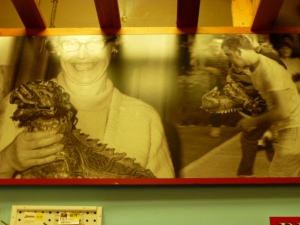 A picture of the original mascot

We learned some fun facts about their mascot, Boxer. In the 1920s, a group of students studied in China and brought back a Chinese statue for the university as a “thank you” for sending them. As a joke, people started stealing it and moving it around to random places on campus. This because a tradition to see who could steal and move it. Eventually, students named it Boxer after the Boxing Day Rebellion, and it stuck. Today, all that’s left is its tail and one leg; an alumnae had the leg in his attic and donated it back to the university.

(Another interesting bit of trivia is that Tommy Thayer, the lead guitarist for Kiss, is on their Board.)