Archive for the tag “HR Management” 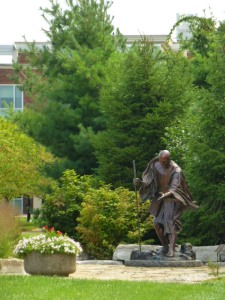 This is a small (just under 2,800 undergrads) liberal arts, Jesuit college in a residential section on the edge of Syracuse. It’s a quiet area, but Erie Blvd, a main drag full of restaurants and stores, is less than a mile away. Because of its Jesuit heritage, they stress the development of critical thinking and thinking outside the box; students who embrace this are likely to thrive there.

Students who choose Le Moyne come because they don’t want a massive school. The Admissions Rep for my area told me that there’s a stronger sense of community here than anywhere else he has worked; he thinks it might be a Jesuit influence and the ingrained idea that people are important. “I got that sense the first time I visited.” At some large places, “you have world-renowned faculty who you may only see as a grad student and sometimes not even then. Here they want to teach the undergrads, and that comes through loud and clear.” 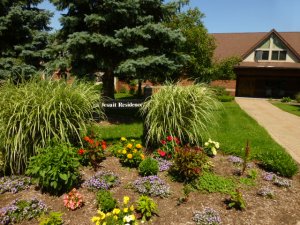 The Jesuit influence is there, but “it’s not heavy-handed,” said the rep. There is a Jesuit Residence on campus and the priests are active. I spoke to several students before taking the tour; 2 of them said they were not looking for a Jesuit school at all; they chose this for other factors. About 60% of students self-identify as Catholic, “but there are all sorts of religions represented including Jewish, Muslim, and nothing at all.” There is no religious requirement other 1 class in religion or philosophy; there is one required community service trip usually during freshman orientation. The tour guide said that he was taking a class on Buddhism to fulfill his requirement. There is a beautiful chapel and masses are offered but never required. However, Mass on the Grass (usually at the beginning of the year) and the Blessing of the Brains (held before finals) are popular events to attend.

Most freshman live on campus, and dorms are fairly typical. They’re slowly renovating them. The most coveted dorm (for underclassmen) is on the top floor of the Business School which has beautiful rooms and AC. They used to alternate years between male and female, “but they guys messed that up,” said the tour guide. “I’m a little annoyed about that!” There are some townhouses and other specialty dorms for upperclassmen, but many also move off campus; there’s plenty of places for rent in the area and plenty of parking. No complaints from students about that. Food “is an 8, mostly because of the options,” said the tour guide.

Students are pretty happy with the social life on campus. Their sports teams are DII and are popular (participation and to watch). Shuttles run regularly around town to Wegmans (a favorite grocery store), Target/Walmart, and Destiny USA (a massive mall with ropes courses and more inside). There’s a pub on campus; students need to show their school ID and a license to get alcohol. Underage students can get free soda. A favorite tradition is “Dolphy Day” (their mascot is the Dolphin – an early symbol of Christianity). This is a day in the spring, usually late April, when classes get canceled. The actual day is a secret until it’s announced at midnight. The next day, students gather on the quad for barbecues, music, and more. 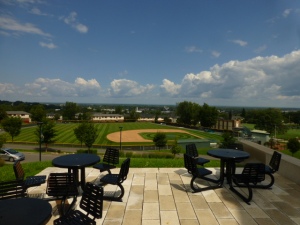 One of the Academic programs that the Rep stressed was the Madden School of Business. “Programs are excellent, and the faculty are terrific,” which leads to a 98% job placement rate coming out of the program. They offer the typical/expected majors, but in addition to those, they also have also one of the top programs for Management Information Systems (ranked 18th in the country), Business Analytics, and HR Management. All students in the school complete at least 1 internships; several do 2-3. There are opportunities around the world, and they can take advantage of the Jesuit school network in India, Mexico, and other parts of the world. 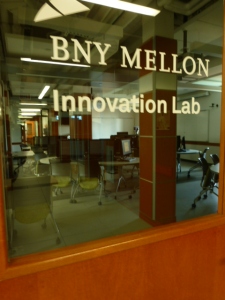 In terms of performing arts, Theater is the only major in visual and performance arts. Minors in dance, visual arts, Arts Administration, and music are available. Auditions are not required for theater or any of the minors, but they are required to get a role in plays or in the music groups. They have several a capella groups: “My favorite is called ‘From Out of Nowhere’,” said the rep.

Health Sciences are particularly strong for a school this size, and they even have a cadaver lab. They have Direct Entry Physician Assistant, Occupational Therapy, and Nursing programs as well as a 3+3 Physical Therapy program. PA requires a 1250 SAT; the application deadline is 1/15. They will interview by invitation only; students must have completed at least 10 shadowing hours at that point (and 50 total at point of entry). Nursing is done in conjunction with St. Joe’s School of Nursing in Syracuse, located about 2 miles away. Students complete pre-reqs and capstones on Le Moyne’s campus and the nursing-specific classes and clinicals at St. Joe’s. However, they live on Le Moyne’s campus all 4 years.