Archive for the tag “gender and body studies” 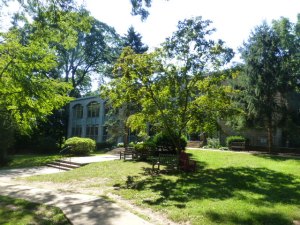 Cabrini is a hidden gem of a school that I hope more people will look at. It has a lot to offer! The student panelists were impressive, articulate, and gave great answers to the “Why Cabrini?” question instead of just “It feels like home!” They talked about the honors program, club offerings, quality of their academic programs, the ability to play sports which wouldn’t have been possible at a larger school, the size, and being able to get involved. Students agreed that this is a transformative experience: One panelist said, “I was a quiet average kid in high school. I didn’t do anything special or get involved. I’ve opened up more and became more independent. I say yes to trying things. It’s presented challenges but also made me stronger academically.”

We drove up a wooded lane to get to campus and stopped in front of a huge stone mansion which (as we soon learned) had been owned by the President of Campbell Soup (and the guy who invented condensed soup). The mansion was one of the few buildings on campus when this was started as a women’s college in the late ‘50s. When they went coed in the early ‘70s, they built a dorm for the males “down the way,” according to the tour guide while the mansion remained as a dorm for females. Most of the university buildings have gone up since going coed giving the campus a clean, new feel. It’s grown so quickly that it now has gained University status (as of July 1, 2016). 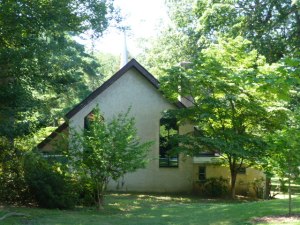 Cabrini is a Catholic college started by the Missionary Sisters of the Sacred Heart (which, unfortunately, is a dying order according to the admissions rep). Just over 1/3 of students self-identify as Catholic; about 30% don’t report a religious affiliation. Students are required to take one religion class; our tour guide’s class was Search for Meaning. She loved it because talked about all religions and students could make it personal to their own journey.

Engagement with the Common Good (or ECG) is one core requirement; this is another distinctive curriculum piece that makes Cabrini stand out, and students had a lot of positive things to say about it. Students take 4 interdisciplinary classes over the four years designed to raise awareness of social issues and give students hands-on experiences in community service and/or solving problems. One student took “Our Interdependent World” which looked at things like social justice, refugees, and climate change. These classes take the place of Comp 101. It’s writing-intensive, but based on current events. 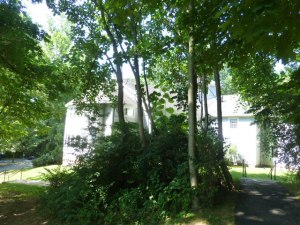 One of the new dorms

The people we talked to said that the community is well-integrated and people are accepting of others. Of the 1300 full-time students, just under 40% (almost equally divided) self-report as African-American or Hispanic. They have doubled the number of Hispanic students in the last few years and are working on becoming a Hispanic-Serving institution (requiring at least 25% Hispanic population). They’re working on bringing in more students from South America; the Sisters are pretty active down there.

The interior of a dorm

The campus is in a residential area of town; not much is within walking distance, but shuttles run 15-20 times a day around town, and all students can have cars. Campus is quiet and safe. “I’ve never heard of anyone using the blue lights. Sometimes a goose will approach you … but that’s about it,” said the tour guide.

This is still mostly a regional institution. A vast majority of students come from mid-Atlantic “ranging from Connecticut to Virginia, an in Pennsylvania, east of the Susquehanna River,” an admissions rep told us. However, most freshmen (90%) live on campus. This drops to about 40% overall after first year. A couple students on the panel were commuters and never felt like they weren’t part of the community. In addition to Living Learning Communities for first and second year students, Cabrini recently created a Commuter LLC; about 25 students get involved every year, and although they don’t live there, they meet regularly.

They’ve created several new dorm options in an effort to increase the number of upperclassmen on campus. Upperclassmen can get suites that are often arranged in “pods” – 4 or 5 bedrooms with 1 bathroom. Dorms house anywhere from 20 to 250 students, and rooms are spacious. There are some triples which are huge. Singles, doubles, and triples were interspersed along the hall we saw. Food on campus “is pretty good! People get very excited about the pickles. I don’t know what that’s about.” Chicken Nugget Tuesday is also popular.

The academic program most worth noting is Digital Communications and Social Media, although pretty much anything in their Communications department is going to be excellent. The studios and technology are amazing. Comcast uses the studios on the last Friday of the month, often hiring Cabrini students to help. They share a radio frequency with Villanova. The newspaper is published every 2 weeks, but the online newspaper is done more frequently.

A couple other majors of note include: Molecular Biology and BioTechnology, Gender and Body Studies, and Health and Wellness Management. They also have multiple dual-degree options including:

The students’ favorite classes include:

They do have an Honors College; students applying to the school will get flagged for this if they have a 3.5 GPA and will get a chance to apply for HC. To stay in, students take 4 honors classes the first year (including their ECG, and Search for Meaning classes) and at least 1 a year after that. The Honors LC has a Master Learner, an upper level student who has already taken those classes, and honors students have special trips (like to the Philly Orchestra) and other events.