Archive for the tag “Freshwater Science” 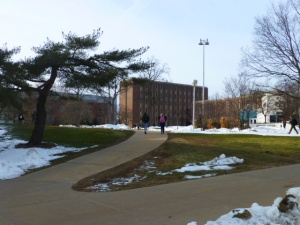 For a public university, this isn’t huge, especially compared to the other public universities in the state. The campus is manageable; “compact” said one tour guide. “It takes no more than 15 minutes to walk across. You can get from class to class in 7 or 8 minutes.” There are buses, but they’re just not needed simply to get around campus. WMU is located (literally) directly across the street from Kalamazoo College, but there isn’t much intermingling between the schools. 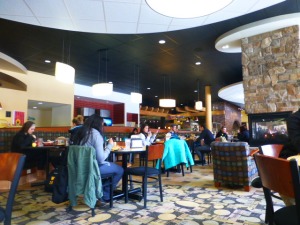 One of the dining halls

Before the info session and tour, I went to lunch with Rachel, a senior  – “but I won’t graduate for another year because I switched into nursing.” She came to WMU for the scholarship and the honors program, and because she felt like she was treated like an individual. People were “super willing to help, and I found that even as a student. Older students, professors, whoever are all willing to give advice.” 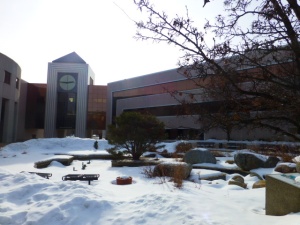 People who will do well here are solid students who also have outside interests, who want the larger school experience with the large athletics, but who still want a campus feel and who don’t quite want to get lost in the crowd. 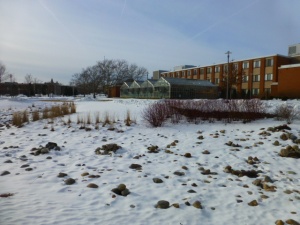 Approximately 1/3 of the 19,000 undergraduates live on campus. Many freshmen live in traditional dorms, but there’s also specialty themed housing with activities, tutors, etc geared towards that subject. Some scholarships carry a residency requirement. Upperclassmen put themselves on waiting lists for the on-campus apartments which are in high demand. The 12,000 or so students who don’t live on campus find housing around town through word-of-mouth, on Craig’s List, or even just by showing up at apartment complexes. I spoke to three students who live off campus; they all said it was easy to find a place. 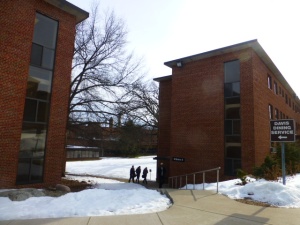 One of the dorm neighborhoods

There are also some Greek houses. Many members live in them for a year (sometimes 2 if there’s room). Often they move in the year after they pledge, so most of the residents are sophomores, occasionally juniors. Only about 5% of WMU students are affiliated with 1 of the 30 sororities or fraternities. 20 of these are nationally recognized; the rest are local or service groups. 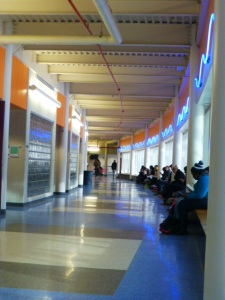 The athletic center hallways. Classrooms are to the left.

Hockey is the big sport here; Rachel wishes that they would build a bigger stadium since it’s always packed. Most games are standing room only. Their big Hockey rival is Miami of Ohio; for all other sports, it’s Central Michigan. “Football is also a lot more fun now that there’s a new coach.” Intramurals cost usually $9 per season per sport “unless you have a team from all the same hall. Then it’s covered under student activities fee.” 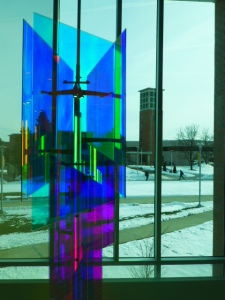 Bronco Bash, best described as a street fair with live music, activities, etc., is a favorite yearly activity. The monthly movies in the school theatre are also popular; for $1, they get popcorn and a movie. These are usually packed. “There’s something to be said about watching movies with 500 college students.” The town of Kalamazoo has plenty to do, including various “fests” (Rib Fest, Irish Fest) throughout the year. For people needing to go further afield for fun, Chicago is 2.5 hours west, Grand Rapids is 45 minutes north, and Detroit is 2 hours east. 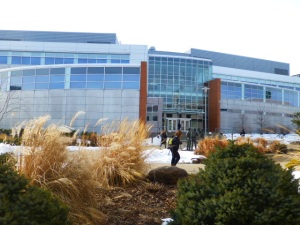 WMU only pulls about 5% of their students from other states and another 7% from other countries. It’s very easy to get Michigan Residency for tuition purposes. Students must live in Michigan for 12 consecutive months; the school year counts towards this. Students will either stay on campus or sublet an off-campus apartment through the summer so they can take classes, work, and/or do research. Once they live in MI for 12 months and switch their licence, they get in-state tuition. 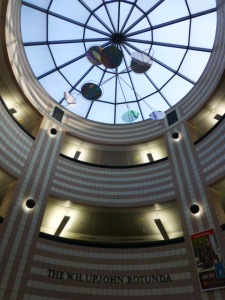 Atrium of a science building

Academics generally well regarded. Although there are larger classes associated with a large public school, they aren’t overwhelming and the students said that there’s always help available. Largest classes for the students I talked to have all hovered around 200 (Psych, Communication Theory, and Biology). Smallest have been 20 in labs and 15 in English. 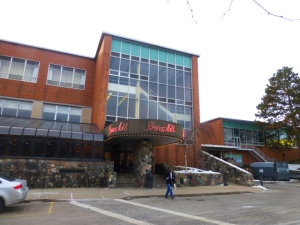 Admission is rolling, but for the best scholarship consideration, students should apply by the first Friday in December. Medallion Scholarships award the most money; winners tend to average around a 3.7 GPA and 26 ACT. If they qualify, they are invited to campus to compete. Winners get $12,500 a year, but all who attend the competition are guaranteed at least $3,000. Endowed scholarships are awarded usually around the middle of March. Students wanting need-based aid should file the FAFSA by the priority deadline of 3/1.

Admitted students’ GPAs hover around 3.3 – 3.4; ACTs average around a 23; about a third of their students fall in the top 25% of their HS class. They will recalculate grades with AP classes getting an additional 1 quality point. If students are borderline, they’ll look at the essay, the rec letters, etc.