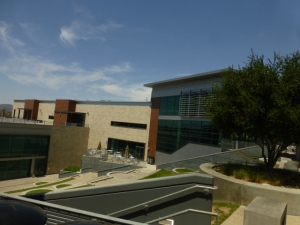 The Student Union on the hillside

CSUSM has a new, well-maintained campus sitting on a hillside. When I parked on the first floor of the parking garage during my visit, I was surprised to see a sign that said “Walkway to campus, 6th floor” – but that’s definitely indicative of its hilliness. “It’s nickname is CSU Stair Masters” said one student. Buildings and landscaping are attractive; this is one of the newest CSU campuses (the 20th out of 23) with the first class of freshman starting in 1990.

Campus is easy to navigate; it’s a medium-sized school with just over 13,000 undergrads; they are steadily increasing their enrollment with record freshman classes for the past several years. It’s still primarily a commuter campus, pulling almost all of the students from California (about 2-3% are from outside the state). Because the school still pulls so many commuters, “Parking is a real problem,” said a recent graduate. “It costs something like $340 per semester to park on campus in the garages! I paid $270 for the dirt lot that was a bit of a hike to my classes.”

The students I talked to said that the professors were the best part of CSUSM. “They’re really accessible and know what they’re talking about.” One student had transferred in from the local community college and loved his Sociology program. “I loved my classes! Academics are about the only thing to rave about there, but we are there for an education, so I guess that’s a good thing.” A few unusual majors include Global Business Management, American Indian Studies, Biotechnology, and Kinesiology. Because they’re so close to the Mexican border (they’re about an hour away), it’s not surprising that they offer a Border Studies minor. Cool minors include Electronics, Music Technology, and Arts & Technology. 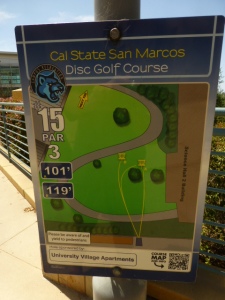 Other than academics, diversity is definitely worth mentioning. This is classified as a Hispanic-Serving institution, but “religion and the LGBTQ communities are very well accepted here.” Another student said that “anyone can find a home here.”

This is considered a less-selective school, maybe because they’re increasing their numbers. First-to-second year retention is almost 80% which isn’t too bad, but their 6-year graduation rate is just over 50% which worries me. However, they do tend to take in many transfers and part-time students, so that may not be as surprising. 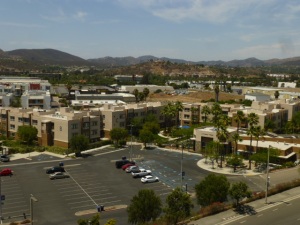 The Village Apartments as seen from main campus

The University Village Apartments are right across the street from the main campus. This is considered on-campus housing since the university owns this. There are a lot of amenities, including grills, a fire pit, a pool, and fitness centers. There are also some apartments affiliated with the school, but run independently. The food on campus is not well-liked by students. Much of it is run by outside venders (Panda Express, etc) but students say that “the food is horrible. It’s all pretty much centrally located with is good, but that’s the extent of it.” Apparently, breakfast and dinner options are limited because so few students live on campus. “Live in an apartment so you can cook for yourself.”