Archive for the tag “arts program”

I was hugely impressed with Mills in every way – the people, the campus, and the programs. It lives up to the small liberal arts school reputation of paying attention to its students, and also of the Women’s College reputation of empowering people. They are proud of being “women-centered” with the aim of helping women (with students as young as 16 and as old as 95) and giving them room to grow. There are only two other women’s colleges in CA (Scripps and Mount St. Mary’s); Mills was the first west of the Rockies. The school is described as being a little more crunchy than the east coast. I’m not sure that’s so true in terms of the type of student, but maybe in terms of being more flexible with their curriculum. In 1990, the school was going to go coed. When they announced this (and it was already in the works to move in that direction), the students went on strike in protest. This has been the country’s only successful reversal of a decision to go coed.

The students I met were poised, enthusiastic, and engaged, although I know that’s a bit skewed: they aren’t going to bring the unenthusiastic students to talk to us, and the students on campus during the summer loved it and want to be there. Their retention rate speaks volumes in terms of the fact that the college is doing something right. Not surprisingly, Mills’ goals include making the students feel at home, retaining the students who come to campus, and having students graduate on time. First year students are put into Learning Living Communities based on a variety of interests; there are two dorms set aside solely for first years. 80% of all dorm rooms are singles. Normally, at a women’s college it would go without saying that these dorms would be all female. However, as students move up, they can opt for coed dorms because Mills does have male graduate students. Housing options range from traditional halls to apartments; many of them are way up a hill – which is also where the dining hall is. Our tour guide joked that by the time they hike up the hill, they’re not even hungry anymore, and often forget why they trekked up in the first place.

The most unusual major on campus is PLEA: Political, Legal, and Economic Analysis; the biggest majors are psychology and English. An unusual component to the English major is the emphasis on writing. Mills offers a 2+2 nursing program with Samuel Merritt (which several other schools also partner with) and several 4+1 programs in business, public policy, computer science, and music. Any student in any major can get an MBA in only 1 more year with good advising; the only undergraduate option for business is to major in business economics, not straight business. The Graduate School of Business building is one of the newest on campus, built to be environmentally sustainable. Public Policy draws a lot of students because Mills is part of a new national project at the State Department level to entice women into public policy careers. Bio and Chem are strong and popular (so much so that they’ve had to add more class sections) with lots of opportunities for research, working with professors, and internships. There is no physics major. Not surprisingly for a college this size, classes are small; the tour guide’s biggest class was 40; her smallest was 8. The average size is 15. Overall, academics are strong, and Mills is one of only 5 schools in Northern California with a Phi Beta Kappa chapter. Lots of internships are available, mostly off campus, but some are done on campus, particularly in the summer in the science labs. Most of the students we talked to at lunch and who gave tours were science majors doing research. One of them said that the only thing she would change would be to put more money towards better lab equipment, but she recognized that she’s a bit biased.

When we arrived on campus, they took us right across campus to the Alumnae House for lunch on the patio where we were assigned seating based on geographic area so we could talk to the admissions rep for our area and a student. Before sending us out on tour, the Director spoke with pride that Mills provides close attention and support it the students; the students and the facilities backed that up. They have multiple lounges for different groups of commuter students (Parent’s lounge, complete with toys; 23+ or the “old women lounge,” traditional student lounge, etc). Our tour guide was a non-traditional student and had access to the 23+ lounge so she took us in. There were several couches, a full kitchen, mailboxes, showers, tables, and white boards. She said that people will come in to take naps and write notes on the board asking someone to wake them up at X time, and people will. People here look out for each other; they want everyone to do well. For example, in the Arts Building, there is no competition for space. Everyone has their own studio, and the place is “humming at 3 in the morning.” 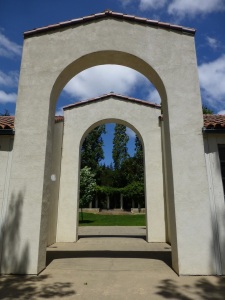 Campus activities abound with a lot of clubs, traditions, and activities. The tour guide told us of a tradition that everyone looks forward to: the Rubber Ducky Races that are held every spring on the stream that runs through campus. Mills competes at the DIII level in 7 sports: crew, soccer, tennis, volleyball, cross country, track, and swimming; about 1/3 of the students participate. “Mills is small. We don’t have many of any type of kid;” this is good and bad. Cliques don’t tend to form, but it’s sometimes harder to form community. However, because they are so close to so many other universities and the resources of a large metropolitan area, students from a variety of places will join up to form groups or expand their circle. For example, the Jewish students join up with Berkeley’s Hillel, and the Mills students hosted a Seder on campus that was “very feminist and new age.”

They receive 2800 applications for a class of about 325; students can use the Common App plus the Mills supplement in which they have to submit a graded paper from a class. Merit Scholarships range from 10-20K and applicants are informed of what they have received with their admissions decision. They do their best to meet full need with their extensive Financial Aid program if students file the FAFSA and Profile.