Search Results for: “university of portland 7/14”

I was impressed with UP’s campus and the people. The students were eloquent without being forced, and six of them were willing to come in on a summer Sunday afternoon to eat lunch with us, give us tours, and sit on a student panel. 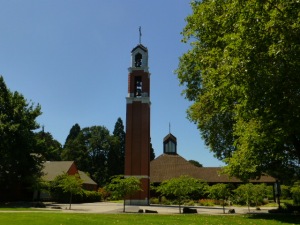 Downtown Portland from UP

UP is a Catholic school in the “largest non-church-going state in the union” according to one of the admissions reps. Half of the students are not Catholic but choose UP because of the community feel, the safety, and because students can (and are expected to) question things. Our tour guide was not Catholic but never felt unwelcome or out-of-place. Students make the religious life what they want it to be. There is even a Jewish Student group (and Jewish professors will welcome the Jewish students for Shabbat and the holidays) as well as an Islamic Prayer room on campus. Priests, who live in all the dorms, are described as the “favorite uncles,” often hosting card games and other events. There are non-required chapel services, but students have to take three theology classes: World Religions (freshman year), Biblical Traditions (sophomore year), and an elective. Nursing majors must take “Death and Suffering,” but most students can choose from a myriad of options including “Divas in the Bible.”

Two notable programs are Direct Entry Nursing and Direct Entry Engineering. Students remain in the program as long as “you don’t give them a reason to kick you out” by failing a class or getting into serious trouble. A nursing major ate lunch with us; during the first two years at UP, some of her distribution classes were Nursing-specific such as microbiology and stats. Clinicals start in junior year (“8 am classes seemed really early until I had 5 am clinicals!” said our tour guide), and students stay over the summer between junior and senior years to continue clinicals so they can graduate in 4 years. We asked our tour guide if she felt that she missed out on meeting people in other majors, or if the program felt too small. Her interaction with others has lessened as she moved up in the major, but she took her early classes with people from all majors and she participates in clubs and lives in dorms with people from other majors.

Professors are supportive and want students to do well; education is hands-on, starting with small classes. Nursing has simulation labs with fancy, expensive mannequins. The new Engineering Building provides hands-on lab space. The business program has a class that lets students invest $10,000; many of the business majors (and some others) will intern with Nike or Adidas which are headquartered in Portland. All students must complete a capstone experience before graduation. Clinicals count for the Nursing Capstone; others will do original research with a professor or another major project. 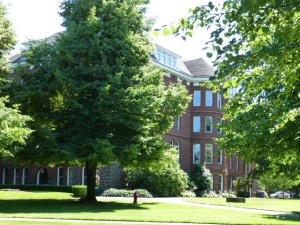 The school deliberately builds community starting with a Freshman Workshop; students get involved and included right away. They get a call from their upperclassman leader (usually someone in the same major) over the summer. The group meets once a week for an hour, talking about everything from using Portland’s public transportation to how to study in college. Secondly, students can’t have cars their first year which encourages them to take advantage of the campus and city offerings. Finally, all freshmen live on campus in mixed-level dorms that helps everyone get to know each other and learn as a community. There is no Greek life, so social life revolves around dorms and all-campus events. By junior year, about half the students move off campus; it’s cheaper and people like the increased independence. Off-campus housing is close and easy to find. UP has built new suites and apartments, but many dorms are traditional. Our tour-guide lived in one of these her first year, and she liked it, especially the sauna and a pottery room in the dorm. This same dorm has a bomb shelter in the basement which is ironic since the building is shaped like an X: “The architect obviously had a sense of humor.” Wi-fi isn’t always so strong in the dorm, requiring an Ethernet cord sometimes; this is one of the few things that the tour guide wanted to change about the school.

It’s easy to get around Portland for internships and activities. The school owns several cars that students can use for free, and they run frequent shuttles. For $2.50 (less if bought from Campus Security), students can get all over the city on Light Rail and the bus system. The school offers subsidized tickets to sports, theater, and more, including $10 tickets to see Wicked and Beauty and the Beast. However, students say there’s so much to do on campus that they don’t need to rely on town for their entertainment – but they do appreciate that it’s there. 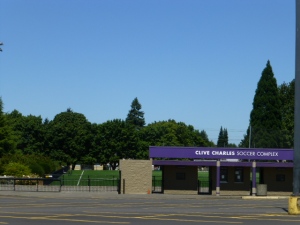 UP is the state’s second smallest DI school. Soccer is big; the stands are packed for both women’s and men’s games. Basketball is also fairly big, and they have men’s and women’s crew (a new program; they practice on the river down the hill), but no football. In addition to sports, there are plenty of activities on campus. They bring in big name speakers like the Dalai Lama and Michael Palin. Each dorm also has its own traditions such as kickball tournaments. Additionally, all the students we talked to said that one of their favorite traditions is the massive Slip-n-Slide event held every year

UP is ranked #1 nationally for service (and 3rd leading school – of schools their size – providing Peace Corp volunteers), with students exhibiting a strong ethical responsibility and social justice. A favorite annual event is the “Man Auction” in which members of a social fraternity auction themselves off for charity. Our tour guide works with a center that hooks her up with things in town like the Food Justice Fund, a hospice program, and more. Some of the “Plunges” (chances to immerse – or plunge – into a certain activity) revolve around service and/or education: going to the Mexico/Arizona border to learn about the immigrant experience or building a Habitat for Humanity house. The pre-orientation Plunge for incoming freshmen is very popular; they spend several days in Portland completing community service with a small group. Students are inclusive and accepting towards all groups. For example, there is a fairly large gay population, and last year, students held Purple Pride in which they fought to have GLBQT issues addressed by the administration; this was well received by students and staff alike.

Study abroad is a major deal here, and they make it relatively easy to go. Language majors must study abroad in a country speaking that language. UP also offers a specific study-abroad program for nursing in Australia in Perth. Our tour guide studied abroad at the University of Grenada where she took all her classes in Spanish. Salzburg is the “flagship” for study abroad. Only 40 students get selected though a rigorous process including interviews in sophomore year. They go all year and travel throughout Europe.

UP takes the Common App. Although admissions is rolling, the class usually fills by December even though the deadline is in January. The school is approximately 40% male (with this year’s freshman class at 44%) and has 25% self-identifying minority students. Merit scholarships are based on numbers with an average GPA of about 3.7 and 1200 SAT (CR & M) for scholarship winners. There are 7 Providence Scholars winners (5 for freshman, 2 for transfers) which pays academic expenses; students are guaranteed a job for 2 years (essentially trading service for the scholarship). There are talent scholarships in drama, music, and athletics; these students must audition or send in a DVD. The performing arts department isn’t huge, but puts on about 4 shows a year.

The campus is in generally good shape, but there are some older buildings. The gym, which looks like a bit like an elementary school gym, is old and historic: JFK gave one of his initial speeches there when running for office (and therefore the building is on the Historic Register and can’t be taken down or significantly altered), and Michael Jordan filmed his first Nike commercial in it. “Before you get too excited, you should know that it’s not such a good thing,” our tour guide said. “The theme was, ‘bad gym, good shoes’.” However, she loves this campus, and it’s not hard to see why. There’s plenty of open space and new construction going on fairly continually. It’s safe; the students we talked to have never known anyone to use or need the blue security lights. They walk around at all hours, and there are security patrols. People know each other, so they know if someone is out of place. The tour guide told us that the decision to come to UP was easy once she visited: “Every person we walked by said hi to the tour guide. It’s a place I thought I could call home.”