A typical walkway on the campus.

Wow. I’m a little awe-struck by this place, and I can see why people flock here and want to apply. It’s nothing short of spectacular. After Berkeley, I was thinking that this would be another one of those Big Name schools that didn’t care about talking to us. I couldn’t have been more wrong. Not only is this an absolutely gorgeous campus, but they’re very deliberate in their intentions and in their discussions with people. They provided a lovely lunch in the conference room in the visitor’s center, and most of the admissions counselors, along with several students, came to eat with us.

This was a surprise for me: The official name of the university is Leland Stanford Junior University. It is located on the land owned by Stanford, Senior, a major landowner in the 1800s who made money through the gold rush and the railroads. When his only child (Junior) died in his teens, the parents still wanted to be able to provide some way to educate others. There were five tenets that they used to found the university. The tour guide said “we’ll let you guess which one is no longer in place.” The three I remember from the tour was that Stanford was set up to be coeducational, nonsectarian, and tuition-free.

Herbert Hoover was reported “the first student” at Stanford, and he was in the first class. Rumor has it, though, that he camped out in the dorms early to get the best room, and then proclaimed himself the first student since he moved in first.

Although Stanford is non-sectarian, they have a large, beautiful chapel on campus with extensive mosaics on the front that had to be redone several times (mainly because of earthquakes). There are also numbered plaques lining the walkway along the front: they have one for almost every graduating class; they started placing these after the first two classes placed graffiti – their graduating year – all over the sandstone. The students settled for the plaques instead when the admin offered. There are also time capsules on campus, including one placed by Stanford’s wife somewhere on campus.

Last year, Stanford received just over 36,000 applications and accepted about 2,500 for a final freshman class of 1,700. (As a side-note, this is the 2nd largest land-owning college in the world. It’s a little mind-boggling that there is such a huge campus for fewer than 7,000 undergrads, although there’s a significant graduate population as well). Admission isn’t so much about whether the applicants can handle to work. The vast majority of them can handle it. It becomes more about what else the student can bring to the table. Stanford is looking for engagement, impact, and passion. If these pop out of the application, students have a chance. Seventy percent of applicants have a 4.0 GPA or better, and 95% are in the top 10% of their class. Test scores “are less important than you’d think but more important than you’d wish.” They don’t only accept people with the best scores, but a vast majority have scored 700+ on their tests.

Housing is guaranteed all four years in dorms, fraternities/sororities, co-ops, townhouses, themed Living-Learning Communities, and other options. Approximately 95% of undergraduates live in university housing, and there are also several thousand grad students (just over half of the grad population) living on campus, as well. About a quarter of the students are involved in Greek Life.

Freshmen cannot have cars on campus but lots of students have bikes, and the shuttles are extremely efficient. Stanford also offers free CalTrain for staff and reduced for students; the shuttles from the train stop (on the edge of campus) is amazing – they have lines of shuttles waiting at the station during busy times, each going to different parts of campus to get people around quickly. The shuttles also get students off campus to shopping and other areas, and zipcars are accessible on campus, as well.

Engineering is a big deal here (although what isn’t, I suppose). The other undergraduate departments are Humanities and Sciences, Education, and Earth Sciences. A few of the unusal majors are Geophysics, Energy Resources Engineering, Comparative Studies in Race and Ethnicity, and Symbolic Systems. The quarter system allows students to study things on a more intense level, and our tour guide really liked it because it allowed for more focus.

View from the balcony 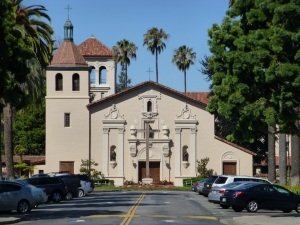 I was hugely impressed with SCU (which, incidentally, used to be the University of Santa Clara, but since they were getting confused with the University of Southern California – same initials AND same colors! – they switched around their name to SCU). This is a beautiful campus located about 45 minutes from San Francisco and Oakland. It’s very close to both San Jose State and Stanford, giving this southern tip of the San Francisco Bay area a real college-town feel, although being in the Bay area, you’re never far from a college. The Santa Clara Mission is still on campus, and the entire place has a very Southern California feel – stucco, red tiled roofs, etc. We got a great view from the 3rd floor balcony of the Union where we had breakfast with the admissions staff.

One of the coolest things about the college is the chance to take a class called SLURP: Sustainable Living Undergraduate Research Project. The campus has a bit of a “crunchy” feel; one of the admissions reps said that SCU is “more of a longboard campus than a biking campus like Davis is” – and it’s true. We saw lots of people riding around. One of the most interesting, and certainly the most unique, activities offered on campus is the chance to participate in the Solar Decathlon Project in which teams of students design sustainable eco-friendly housing. SC was the smallest campus participating in this national competition and the only one west of the Rockies. They took 3rd in the competition in DC, beating out Ivies and those schools with grad students working on the project; SC only had underclassmen working on the house, which is now displayed right on campus (those winning 1st, 2nd, and 3rd get to keep their houses as part of their bragging rights). 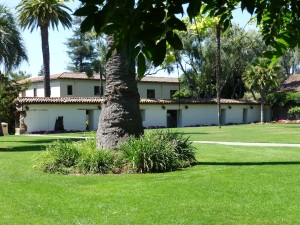 SC has slightly over 5,200 undergrads, and 3,000 grad students but none of them are TAs who teach classes. Most work with professors doing research (although some will grade). This campus is highly focused on undergraduates, keeping true to its Jesuit roots in which education is highly esteemed. Their dedication to students shows in their 94% freshman to sophomore retention and 85% 4-year graduation rate. Just over half of the undergrads are from California. It’s very much a residential campus. They guarantee housing for freshman and 95% live on campus. About 75% of sophomores stay on campus, and many students take advantage of the Residential Learning Communities.

60% of students are in the liberal arts division, 25% in business, and 15% in engineering. They have several particularly strong departments, including communications (including a mass media focus), psychology (including graduate work), pre-health, engineering (incluidng biological engineering), theater/dance/art (and do not require auditions except for scholarships), and business. As an illustration of the strength of the program and the school, last year, 194 of the 197 graduates from the business program had a job at the time of graduation. Students who think they want to be in the Business or Egineering programs should apply directly to those programs. It’s easier to switch out than get in once starting at SC since they have to spend a year in the program to which they were accepted before they’re able to switch to a different one. However, there are 3 interdisciplinary minors in the business school that students don’t need to be in the Business program to take: Retail, Entrepreneurship, and International Business. Our tour guide was in the Retail program and loved that she got a taste of a lot of different subjects in business. 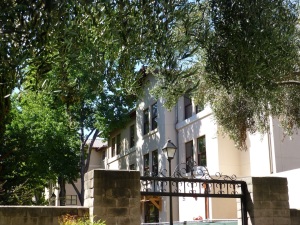 SC offers acceptance under both the ED and EA programs (both with 11/1 deadlines) and RD (1/7). They accept about 50% of applicants with an average of 3.65 GPA, 28 ACT, 1280 SAT (they don’t look at the writing). There is no separate app for scholarships, but they do require both the FAFSA and CSS. There is limited merit aid for international students.

There are 19 D1 sports, and they were up-front about the fact that if a student hasn’t been recruited by the beginning of senior year, they probably aren’t going to play for SC. Just under 1/5 of the students participate in Greek Life, but they’re “off campus Greek.” They are not allowed to advertise, put tables out, etc. The tour guide said that people will wear t-shirts that say “Ask me about ___” to get the word out about events or rushing. Study abroad is popular amongst the students, and the school even has a study-abroad program in Cuba.

Students seemed very happy on campus, and raved about their professors, the classes, and the overall atmosphere. The problems that the students mentioned were that there wasn’t AC in the Western dorms, students were not very politically active, and that there wasn’t any discount on public transportation. Even though CalTrain and busses run right past campus and it’s really easy to get to wherever they want, there is no agreement with the public transportation systems like there are at other colleges.