One of Rowan’s claims to fame is that it hosted a meeting in 1967 between President Johnson and Soviet Premier Kosygin at the Hollybush Mansion, the university president’s home. They met here because of its location halfway between the UN and DC. Apparently, Lady Bird Johnson took the chairs which are now in the Smithsonian with a tag that says “Donated by Rowan” – the tour guide says that if we go there, we should tell people that they were taken from Rowan, not donated!

I had no idea what to expect from Rowan, one of New Jersey’s public universities, but I walked away with a good impression. Students are happy and enthusiastic about the programs and the opportunities they’ve had. This school of 10,750 undergraduates has recently been designated as a state Research Institution, and they’re proud that they do not do research at the expense of the undergraduate. Instead, they’ve been doing a great deal to expand their offerings and opportunities for their students. More money has been going into resources for students, and more scholarship money is available than ever before. They’ve increased their academic offerings for students, including eight new PhD programs and several new Masters programs are in the pipeline. Their Med School is highly competitive, receiving 3,000 apps for 50 seats, and it’s only the second university (after Michigan State) to offer both an MD and a DO (osteopathic medicine) degree. This has had a “trickle-down effect” into their undergraduate programs, and every undergraduate college on campus has a pre-med program, even the performing arts, including using dance as part of therapy. They’re getting away from the traditional model of pre-med prep. 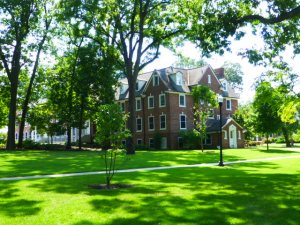 They are proud of their Four Pillars program which includes: Economic Engine (helping students getting job and becoming involved in the community); Affordability (they froze tuition by keeping efficiencies in the system); Accessibility (making education available even though they’re getting more selective); and Growth (they’ve built the Stratford Campus for the medical and graduate programs, and they’ve built a partnership with Rutgers for a biomedical school). They’re looking to DOUBLE their student population over the next 10 years. They’ve already shown tremendous growth in their numbers; they used to only serve students from 4 or 5 counties; now they’re a well-known regional university, and they want to become better known across the country. Their out-of-state applications have been rapidly increasing, almost doubling last year from 400 to 700. In the most current freshman class, students had an average of a 3.6 GPA and 1200 SAT or 26 ACT.

Outside of the new science building

Inside the Science Building

Some of the students’ favorite classes have been the History of WWII, the Arab-Israeli Conflict, and Developmental Psychopathology. Their classes range from 10-35, and they appreciate the small classes and the chance that they know the professors; people notice if they aren’t in class, and they’re able to get a lot out of classes. Rowan has a strong business program, including Supply Chain and Logistical Systems, Management Info Systems, Entrepreneurship, and other more usual concentrations. Engineering students can choose to specialize in Chemical (ranked 3rd in nation, top among public universities), Civil and Environmental, Electrical and Computer, or Mechanical (ranked 8th in nation). Within the Humanities and Social Sciences College, their Africana Studies, Law and Justice Studies, and Planning are the most unusual majors. In the Science and math division, students can choose from all the usual majors, plus Bioinformatics and Child Behavioral Services. Education is strong at Rowan, and they have a program that allows students to graduate before student teaching, as long as they’ve fulfilled all the other requirements. Two of the tour guides had just graduated but were staying for one more semester to do their student teaching requirement.

Although there’s a lot to do on campus, students love that they’re only 20 minutes from Philly, 45 minutes to the shore, and halfway between NYC and DC. The school is doing a lot to do more outreach into the local community, and the activities on campus give students a real sense of community within campus and into the wider town. Unless students commute from a parent’s house, they have to live on campus for the first 2 years. There are freshman-only dorms which are mostly traditional style, but some have suites where they have to clean their own bathrooms. The university is building a 5-block-long apartment complex with Honors housing, B&N bookstore, Starbucks, retail shops and restaurants, arts and entertainment district. Ten percent of the student population joins Greek life. 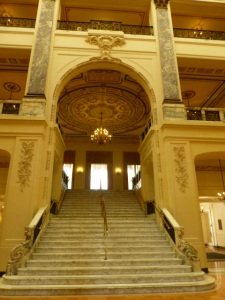 Monmouth is a private university with about 4400 undergraduates. The main hall on campus is Wilson Hall built in the early 1900s and named for President Wilson who had stayed there during his 1916 campaign for president. Now on the National Register of Historic Places, it is surrounded by the Shadow Lawn Estate, modeled after the Gardens of Versailles. Many people will recognized it as Dr. Warbuck’s mansion from Annie. The Guggenheim family “cottage” (mansion) is also on campus and now houses the library and cafe. 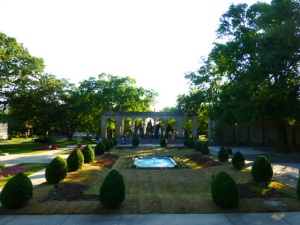 Monmouth stresses Experiential Education, required of all students. This can be fulfilled through study abroad, internships, or other similar experiences. Classes are caped at 35 with an average size of 22. The tour guide’s largest classes were 35 in her Gen Ed classes; the smallest had 8. She had transferred from Ramapo (a larger public school) for the hands-on experience and to take advantage of the 5-year BA/MBA program; she’s planning on doing her MBA in Health Care Management. “I like that they make sure we succeed. It’s not survival of the fittest here.”

There are several notable academic areas to point out:

Housing is guaranteed for freshmen, and starting this year, for sophomores as well (a new sophomore residential hall just opened up). A tunnel under the road leads to the residential oval where there’s a 50/50 split between traditional housing and suites, although freshmen tend to be in more standard cinderblock set-ups. Dorms are wired for wifi, but rooms have backup Ethernet hookups. Each room has cable access for students wanting to buy into that system. There is no official Greek housing, but groups can live together on a hall as long as they don’t exceed 15% of space. Most students will opt to live on campus, but there’s plenty of off-campus housing should they choose to move off. Most students living in non-campus housing will need cars or will ride the shuttle into school. Parking costs $300 a year in the assigned lot; it’s first come, first serve.

The Multipurpose Activity Center (MAC) was completely built with donations. They have TV and radio stations inside, student activity offices, and plenty of meeting spaces. There are even special recycling bins; by using them, students win points for iPods and more. Monmouth has a world-class debate team which won a national competition last year. Students are given a calendar of activities when they arrive on campus. “There’s a ton to do on and off campus,” said the tour guide. Big campus traditions include Battle of the Buildings (inter-dorms competition in the fall, Winter Ball (prom-like dance), and Spring Fling. Off-campus trips, include weekend shuttles to the beach, require a $5 reservation to hold a the spot, but they get it back when they get on the bus. 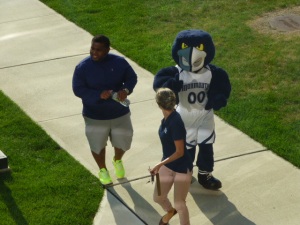 Admitted students tend to have a B+ average and have about a 1600 SAT or 24 ACT. Crossover colleges are often Scranton, Charleston, Iona, TCNJ, Rowan, and Drew. About 65 students are admitted to the Honors program during the application process. They are housed together and have access to specially designed classes that are often thematic and emphasize creativity. Students need to keep a 3.5 in the major and 3.4 overall to stay in the program. The Honors Program has about a 94% retention rate.