The ceiling of a reading room.

I wish I had known about OWU when I was looking for colleges. Their slogan is “The Opposite of Ordinary” and I can see why. Before visiting, I knew that OWU was one of the Colleges That Change Lives (and they’ve also been named by unigo.com as one of the top schools that fly under the radar but shouldn’t!) but knew almost nothing other than that. Now, I wish I had had access to their programs when I was an undergrad. The students I talked to raved about the Travel-Learning Courses and the university’s dedication to the Theory-to-Practice model, among other things. The school offers at least a dozen classes each spring (and occasionally in the fall) in which travel is part of the curriculum; the class sometimes travels during spring break, but more often will go “on location” for 2-3 weeks after the semester ends in May. Recent classes offered include Global Poverty (Econ class; travel to Bangladesh); Mathematical Models of Climate (Math/Comp Sci class; travel to Alaska); Beginning Chinese II; Castles and Cathedrals (History class; travel to the UK); Tectonics, Volcanology, and Geothermal Energy (Geology and Geography class; travel to Iceland); and Translational Research in Psychology (travel to Tanzania).

The campus impressed me immediately; I drove in on the main street that cut through campus. On one side, a three-story gothic grey stone building sat at the end of a brick walkway; on the other, a wide brick pedestrian walkway stretched for at least a block in the other direction. Pulling into the visitor parking lot next to the big stone building, I got to see the mix of buildings: older, more traditional-looking buildings closer to the road (much of which was the original college) with the newer, funky architecture stretching behind them. The “JayWalk” runs perpendicular to Sandusky Ave, separating Res side from Academic side. A beautiful new student center sits along the JayWalk across form the new library. My tour guide raved about the food options on campus; I can’t think of another student who was so effusive in her praise of his or her college’s food offerings. They do, of course, have a traditional dining hall, but meal plans are organized on a point system, and these points can be used at dining hall, in any of the multiple coffee shops/grab-and-go shops around campus (which are tucked into all sorts of corners, making for great study areas), the on-campus food court with a variety of options I’m used to seeing at much larger schools, and even downtown at places like Subway and the locally run coffee shop.

The town of Delaware is cute and clean; although it’s nothing fancy, there are things to do on Main Street, easily accessible from campus. Standing on campus and looking at Sandusky (the main street cutting vertically through campus), it’s easy to see what kids have access to, including coffee shops and book stores. Town-gown relations are very good. The school opens up the JayWalk a couple times a year, and there are “street fairs” held there. Arts, sports, and other events on campus are open to the public and well attended. The town holds First Friday parties when shops are open late, and students take advantage of this. The ice cream shop has created a “Battling Bishop” ice cream after the school mascot; the movie theater gives discounts to OWU students. Additionally, they are only about 20 minutes from Columbus, so they have easy access to all that offers.

Athletics is a big thing on campus; about 1/3 of the students play a varsity sport, and watching the games is a big thing on campus; school spirit is strong. They have two full stadiums: one for lacrosse, field hockey, and soccer, and one primarily for Track &Field and football. T & F (who were DIII finalists last year) and Cross-Country are particularly strong, as is Soccer; the admissions counselor I spoke to said “Don’t tell the football team, but we’re a soccer school!” The new gym is large and comfortable; this is the building with the funky, wavy roof that caught my attention when I first drove on campus. They also have a newly built geothermic aquatics and rec center which includes a diving well.

About 30% of students participate in Greek Life but this does not dominate the social scene. They cannot rush until 2nd semester so students have already formed groups of friends, and it is not unusual for friends to rush at different houses. There is quite a bit of inter-house cooperation and socializing. There is also a rush – called a “Slush” – for Special Living Houses on campus. These houses are based on a variety of interests such as Habitat for Humanity, World Languages, Thought House, Women’s Studies, Black Culture, InterFaith, and Peace&Justice. Freshman dorms are the only ones with communal bathrooms.

Although this started as a Wesleyan college, they have dropped their affiliation (although they kept the name since that is now part of their identity). The two largest religious student groups on campus are the Catholic group and the Hillel. Hillel is extremely active and inclusive; the week before I toured, the students had thrown a large Seder to which everyone was invited. They host speakers and other events and will carpool to Synagogue. 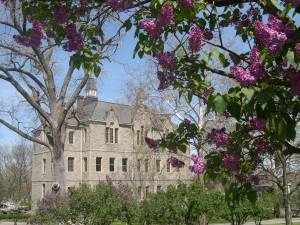 The students who tend to thrive here are usually the B-B+ students who are go-getters and who are active in the community. There is a tendency to get involved and to help others. People are not stereotyped here and are encouraged to go after their passions, recognizing that majors and outside interests don’t always intersect. Math majors participate in theater; music majors play sports. Students clearly liked their surroundings. There was a lot of camaraderie: students were studying together on the grassy areas, they greeted each other when passing, and it felt like a community. I’ve already started talking this school up to my students.