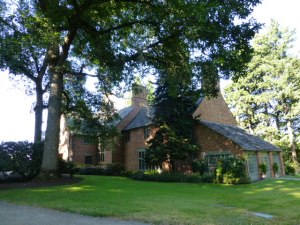 This hilly, wooded campus is STUNNING. The central building, housing admissions and administrative offices, is the Frank house (from which you can see both Mt. Hood and Mt. St. Helens) which had been the Frank family home; after the wife died suddenly, they donated it and left town.

Lewis and Clark brags that this is one of the few liberal arts universities in the country located so close to a major city. Shuttles run every hour to downtown, six miles away, and both students and faculty can commute to school via shuttle. This also gives students opportunities for recreation, internships, cross-registration at other institutions (but there’s no formal consortium). However, they’re still in the woods in beautiful surroundings; the only down-side to the location is that very little is located directly off campus (restaurants and shops) within walking distance. The College Outdoors program is worth noting; they do all the typical things (kayaking, hiking, etc) and some not-so typical events such as Mushroom Hunting and yoga retreats. Students who receive federal financial aid can apply for scholarships for these trips.

Teachers strike a good balance between teaching and research; they’d rather be teachers than researchers, even though they do their own research (and about 10% of the students stay on campus over the summer, many of whom are there to do research with professors). The professors we spoke to at dinner said that it was important for them that their students walked away from classes knowing how to apply knowledge. They clearly want to get to know the students. For example, the Math department builds a close community starting with a Mt. Hood hike every year. Three of them even showed up to the Counselor dinner, more than any other department (although two music teachers were there as a close second). Interestingly, the math and the biochem, bio, and chemistry departments have mostly female faculty.

Sculptures outside an academic building

Academics are designed to give students a broad perspective on their chosen field, and also let them explore the areas they’re interested in. Psychology is the biggest major and introduces students to all aspects of the field: child, abnormal, developmental, cognitive, neuroscience, and more. The music department is strong and lets them focus on several areas (and includes African Drumming). The Foreign Languages department is unusual because students can declare a FL major and study more than one language and gain proficiency in two or more areas rather than majoring in a single language. International Affairs has become a fairly large department, and they’ve added concentrations (minors) in any of several Ethnic Studies (which are open to any student, not just IA majors). The university has recently added an entrepreneur program which runs for a week in January. Students come to campus for seminars, meetings, and a competition (both current students and recent graduates take part); five semi-finalists are chosen and are given a small fund towards putting the plan into action and taking it to a national competition. 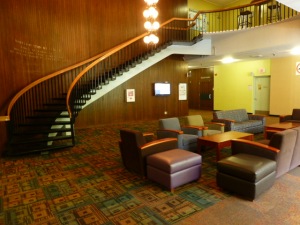 We asked a couple students what their favorite classes were. One said it was “State of the Family,” a Gender Studies themed 2nd semester freshman seminar class: “The professor was 5’ tall and the scariest person ever – but I learned a lot!” Another said it was her 1st semester freshman seminar class, “Creating the Self.” The professor brought them out to one of the gardens, and the student (along with others) performed Antigone on her first day of class. The texts for the 1st semester freshmen seminars are the same but the theme is different. The 2nd semester focuses on whatever the teacher wants, such as Emerging Empire, Dance and Vampires, and Mostly Mozart. The tour guide’s class sizes have ranged from 10-45, so they get time for discussion, hands-on work, and personal attention. 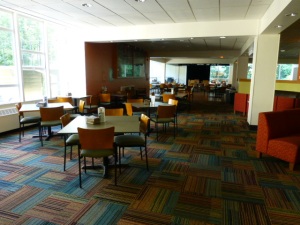 They don’t have any Freshman only dorms, but they do have upperclassmen only dorms. Freshmen and sophomores are required to live on campus; 60% of juniors and seniors stay. They have a great deal of support for First Gen and low-income through multi-cultural affairs and student affairs offices. Students get actively involved in activities. Forty percent of students participate in sports (DIII). Football has lots of fans, as does volleyball. Crew is increasing in popularity. There is no Greek Life (a donor who gave a lot of money stipulated that she wanted ice cream served at every meal, a piano put into every common room, and no Greek life). This is an open, inclusive community with a high minority population and people coming from all walks of life. They have a feminist student union, queer resource center, united sexualities, etc. Students are ok with whatever people are into.

Sixty percent of their students do a true study abroad (not a week-long learning extension of another class). “Where are you going?” is commonly heard; it’s a question of when and where they’ll study abroad, not if they’ll go. The school is serious about providing students with an international perspective on the world.

This is a test-optional school; the “portfolio path” which replaces standardized test scores includes 2 graded pieces of work: 1 analytical and 1 quantitative, and then 2 recs speaking to those two areas. 10-12% of applications go that route, and the students accepted do fine at the university. This is a good option for someone who works hard and has good grades but does test well. Merit scholarships are awarded at the time of admission based on grades in the core classes including weight on AP and honors classes (and there’s no limit to the number of AP credits they can transfer in). They also give scholarships for leadership, music, and debate, but the faculty decide on these based on auditions or portfolios/DVDs.