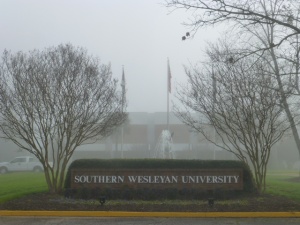 SWU (and they pronounce that as one word) is a small, pretty, highly faith-based campus located about 10 minutes from Clemson. The main entrance appears quickly; I was driving in some fog on the morning I visited, and luckily the GPS warned me. Although the sign is large, it’s angled in a way to make it easy to miss until you’re on top of it. 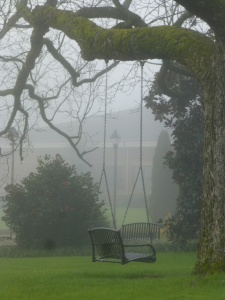 The people I met were friendly and welcoming. I had planned on just asking for a packet of information, maybe talking to a student worker for a few minutes, and taking a bit of time to wander campus. The student at the desk introduced me to a rep who sat and talked for awhile, despite her just getting her day going and (I’m sure) having other things to do. When one of the tour guides came in, she took me on a personal tour on the golf cart since there weren’t any families registered for the 9am tour that day.

The tour guide was a senior bio major from the local community. “I couldn’t imagine going anywhere else!” she told me. Most of her family had come here, and she would make the same decision again if she had it to do over again. 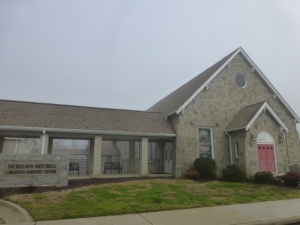 The rep emphasized the community and relationships with others on campus. Although that has developed into the totally clichéd catch-phrase du jour, I think it’s probably true here. This is very much a Christian campus, and the students choosing to come here are living by a particular code of ethics that “lends itself well to community.” There are service days, mission trips, and other things to link students to each other and the wider community. That being said, I did ask fairly directly how she would distinguish this school from several other highly religious institutions that are scattered throughout the Bible-Belt (including a few within about 45 minutes of SWU). I’m not sure I got a full answer, but she did try: “I hear that relationships here set it apart from others. This is a great place for students who want a small environment, research, and opportunities for personalization.” 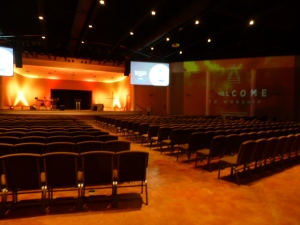 The chapel has lots of media!

“We’re faith in action, not just name. We emphasize making a change and working for Christ. We see every vocation as a calling, not just the ministry.” It is a dry campus, as one would expect, and there are limited visitation hours in the dorms – and signs on the doors clearly stated that doors were to be open and feet on the floor. Students must take 3 required religion classes as part of the Gen Eds, and they must earn 24 chapel credits every semester. “A few people complain, but they chose to come here; if you’re not into this, SWU isn’t for you.” Chapels are held every Monday and Wednesday. Church services on Sundays usually don’t count towards this, “but people go anyway because they want to.” The tour guide told me that the style of chapel services varied; some were musical (they have gospel choirs, chapel band, etc), etc. — they put out a schedule of chapels at the beginning of each term so students can plan to attend those they’re more interested in. They also hold Spiritual Emphasis Weeks where students can earn up to 5 chapel credits; often classes are canceled on Tuesdays and they hold special events. In addition to a Religion major (concentrations in Ministry, Worship, and Youth/Children’s Ministry), students can choose Church Music (BM degree) as well. 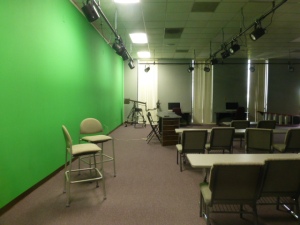 The communications room with the green-screen against one wall

They have a new program working with the County Disability Services. They have a special education facility for adults; they have jobs here and at Clemson (they can ride the CAT bus) and can even take some classes. Special Education majors work there, and can even be RAs in the facility. The participants are selected by Disability Services since they know who will be successful, would qualify for the classes, and benefit from the program. 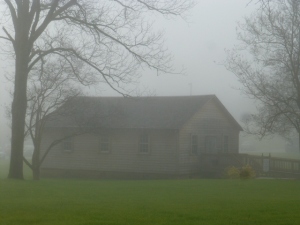 This is a great community for people who love being outdoors. There’s 100 acres of woods on campus, high and low ropes courses, bike trails, and more. There’s a small town within a couple blocks of campus, and Clemson is about 10 minutes away. Students can participate in Army or Air Force ROTC on Clemson’s campus.

One of the buildings on campus is the Freedoms Hill Church which was a stop on the Underground Railroad (and still has bullet holes in the door). “It smells like history!” said the tour guide. They were going to tear the building down, but the campus saved it. 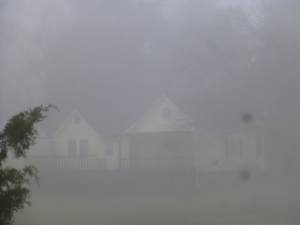 Bard to see through the fog, but this is the crime house

There’s also a Crime House where the Criminal Justice and Forensic Science majors can do hands-on work on forensic investigations.

The new dorm is great! It houses about 250 students, coed by wing. There’s a small fitness center and a small chapel in addition to a great central lounge (the 2 single-gender wings come off of here) with a fireplace and coffee bar. The housing deposit determines placement. The rooms are huge and are set up suite-style (2 bedrooms with a bath in between. 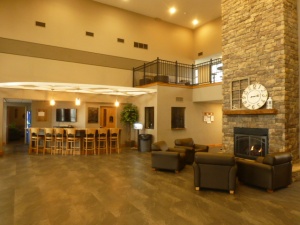 The lounge of the new dorm

They have a great gap year program called One Life that involves travel. Usually students will do this right out of high school, but there are options for doing it once they’ve started college. They earn 30 credits so they aren’t actually behind. I spoke with a student working at the coffee bar (thank you SWU for the coffee!) who had participated in the program. “It was the best thing I’d ever done. There are a lot of weird boundaries and rules like we’re not allowed to have our cell phones for a lot of the time. Vulnerability is encouraged. Looking in from the outside, you’d ask why anyone would ever do this. We joke that it’s like a cult, but it’s an intense discipleship. It helps you find god’s calling even if you don’t want to go into the ministry.” He’s studying Media Communication and couldn’t be happier. Right across from the coffee bar (which is entirely student-run, by the way) was a new media room with one wall serving as a green-screen.

I asked the tour guide about the LGBTQ community. She did say there were a few people who self-identified as members of the group, “but we are a Christian school. We love the person. We’re all sinners. We don’t condone actions, but we love the person because that’s what we’re called to do as Christians.” We talked about the choice to attend a school with this set of expectations: “It’s like going to Chapel. If that’s not something you’re comfortable with, this isn’t the place for you.”