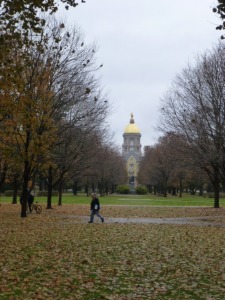 Notre Dame is fabulous. Visually appealing, vibrant, and with all the opportunities you could hope for, students seem to thrive. Students have the best of all worlds: top-notch academics (“professors aren’t just top of their fields – they’re famous,” said a student), arts (the fine and performing arts facilities are some of the best funded and most-well resourced that I’ve seen), athletics (the stadium fills up – and it holds several times more than the size of the student body), and more. “If you’re willing to think of things you want to do, talk to people, make things happen … sky’s the limit here.”

I contacted a junior I know who met us to show us around; he was much more forthcoming than most tour-guides would be, and we feel like we walked away with a clear picture of the types of students who would thrive, find and take advantage of opportunities, and contribute to the life of the school. “You definitely have to take the initiative to talk to professors,” he said. “You can do a lot here, but nothing is going to be handed to you.” He’s said that he’s an outlier on campus. “I’m not motivated by grades. Many students here are. I’m cognizant that I’m not typical.” 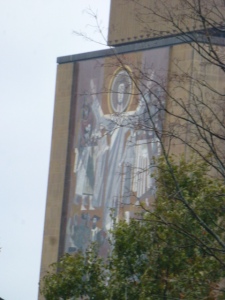 “It’s very Catholic, white, and upper middle class here. If your name is Katie, Michael, Patrick, or Brendan and are from the suburbs of Chicago, you’re going to fit right in.” He admits that he was being half-sarcastic … “it may be a bit of an exaggeration, but not but much!” It is ranked as the #1 Catholic school in the country; there’s plenty around campus to remind you that you’re at a religious school, it’s less in-your-face than I thought it might be … two notable exceptions are the Touchdown Jesus mural and the First-Down Moses statue (“someone stuck a pumpkin on his finger at Halloween!”). The university does, at least superficially, abide by Catholic policies. For example, the student told us that birth control had been banned through Health Services (not unheard of at many Catholic or other overtly religious campuses), but the ban got overturned by students who protested. He thinks that the ban was originally put in place maybe to appease donors, “but this also speaks to the fact that they do listen to students.” 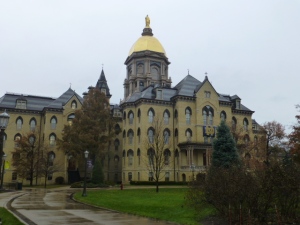 Campus is huge, much bigger than I expected for the number of students (a little under 9,000 undergrads). Construction and/or renovations seem to be ongoing, and they stick with the yellow brick that they’re so famous for, although on one building, it was easy to see where they ran out of the traditional brick and used a slightly different mud. There are quite a few things walkable off campus; we ate with the student at a Chipotle right off campus where there were a couple blocks of shops and restaurants with apartments above them. Most students do live on campus, and dorms are good. 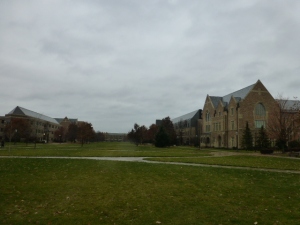 Athletics, of course, are a staple on campus, both to play and watch. On Football weekends, the student said that he knows that it’ll take longer to walk to class on Fridays “because the alumni family is back and taking up the sidewalk. The Michigan Game was the most ridiculous I’ve seen so far.” Famous people regularly come in to tailgate. The stadium regular fills up, “and it holds many times the number of students at the university – that’s how many people come to watch. People have bought places in town to stay just for this reason.” Overflow parking is on the golf course “which tells you how well they regard golf here.” They’ve recently build massive sport-specific training facilities; we didn’t go in, but we could see in through the windows at the extravagance of the equipment (including technology). These were larger and nicer than many academic buildings I’ve seen. It was definitely over-the-top, but seeing as they’re Associate Members of the Big 10 Conference, it’s clear that they’re making this a priority. 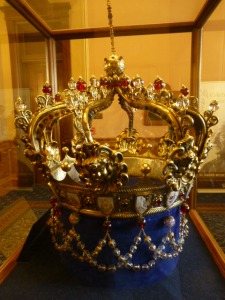 Luckily, academics are also superbly well-funded. “More is more here. There’s this sense of ‘How much can you do?’ Things radiate outward.” The Physics building was used for some of the early research of the atomic bomb, and in fact, the government took it over for a couple years; they have an accelerator here and in an abandoned mine in SD. These have to be underground to avoid random particles in the atmosphere. The College of Science is separate from Arts & Letters here. They’re well known for the computing programs with options in Science-Computing, Chemistry-Computing, and Applied/Computational Math and Stats. Surprisingly, the Med School acceptance rate is only about 80% – while still well above the national average, I expected higher at a powerhouse like Notre Dame. 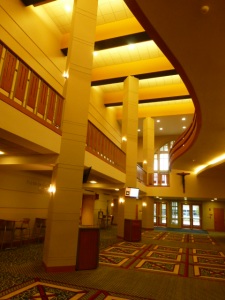 The interior of the Performing Arts building

The Performing Arts building (housing the Film, TV, and Theater major) is phenomenal with lots of concert halls and a cinema with THX. They have a College of Architecture and College of Global Affairs (each one with only the 1 major; Architecture is a 5-year program). 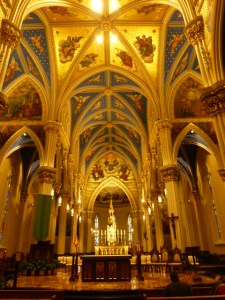 interior of the chapel

Students are good in terms of service and giving back; being here has made the student learn about the sheer impact Notre Dame has on the world. They have enough money to help students get involved in what they’re interested in. Summer Service Learning Projects (SSLP) allow students to get grants for an 8-week immersive project with a non-profit. The grant provides a stipend, room and board, and sometimes 3 credits towards a major. “Notre Dame is very much about the equality of opportunities …. Almost!” He feels like there are ways they could improve. He comes from a more progressive area in California, and he sees some of the hypocrisy here, much of it stemming from the Catholicism. For example, ND sponsors March for Life but not for Choice, even though there are many students who participate in this. “LGBTQ may not be as well funded as other things, as well, although the community is here and accepted on campus.” 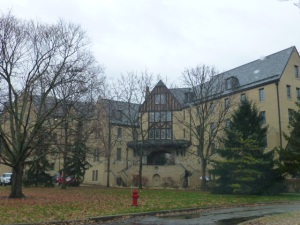 People are good at global-mindedness, as well. Somewhere between 60-70% of students study abroad, both at the ND-run centers in Ireland and Rome and through other programs.