Central College is a hidden gem located about 45 minutes from Des Moines. Students are out and about (even on a cool day in early December) and are helpful and friendly, going out of their way to provide directions or talk about their experiences on campus. “You’re going to have people who want to get to know you, who see you every day, in a residential community. Some come with anxiety issues, that sort of thing – and they blossom because professors nurture them, take them out of their comfort zone, help them do things they didn’t think they could do. People get comfortable and then they’re doing things they couldn’t imagine doing. You’ll get true, genuine support here. Faculty will be blunt – good and bad – when it’s warranted. Students don’t try to get legs up on others.” Combine that level of support with a tuition price point of $18,400 and you have a solid, affordable education that will provide personal and academic growth.

I spent about an hour talking to the Maryland rep, a recent Central alum. “My freshman year, I was all about athletics. I was not inclined to go to class. I just wanted to play basketball. I ended up having to go to my local community college to bring grades up and turn myself around.” He appreciates how much people here approach students on personal level. “I was exposed to so many different opportunities right from the start. They were ready and constantly there. My advisor and class dean were emailing. Professors were keeping me accountable and I had support. I felt like I had a bunch of moms and dads around. That was my concern coming from Texas – it had to be the right fit coming from that far from home. Interactions were all great.” Professors would invite them to Thanksgiving, but they’d also put their foot down when they have to put their foot down. “There are immense opportunities for growth.”

Students who thrive are those who are involved in their communities, maybe who come from the same type of small towns where they know everyone. Those who struggle are those who just want to do their time and be anonymous. This is a 4-year residential community; “it’s helpful because about 40% of students are from outside Iowa. There are more students from Arizona than from Minnesota,” said one of the students I talked to in the chapel. (The rep told me that they’re starting to get more East cost and Southern states represented). Another student said that 75% of students stay on campus at least 2 weekends a month. 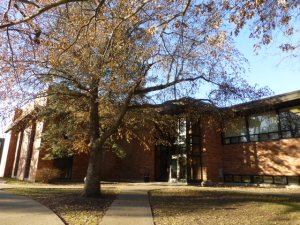 Athletics are a big deal here – almost 75% of students are varsity athletes! I asked how the non-athletes fare on campus, or if they feel left out. “We do a great job of including non-athletes. We have over 100 clubs/organizations if they don’t want to be involved at all, but a lot will come watch the games because they’re fun – but they can also be a student manager or in the AT program if they want to.” They’ve recently renovated the athletic center with football locker rooms, a new wrestling center (the biggest in nation!), and a student athlete lounge. Phase 2 will include a bigger AT room. Football brings in the most fans; softball, basketball, and wrestling round out the other top sports. 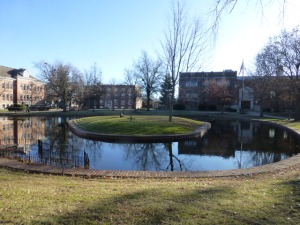 They have a great pond that’s the central focal point of campus. Many traditions center around this pond. The Lemming Race at Homecoming involves students dressing in costumes, running from the library to the pond, jumping in, and singing the fight song on the island. Students will ice skate on the pond in winter. In the spring, they hold Spring Fling boat races – they get boats but no paddles. Often, students are tossed in on their birthday “but only if they’re jerks!” said a student. Other traditions include the first-year dinner at the President’s house (“He always makes himself available!”), Kahoot Night, pumpkin carving contests, and Twas The Night Before Finals (late night breakfast).

Campus is located in Pella, a town of 10,000. There’s plenty to do: movies, bowling, restaurants, cafés, shopping – but the rep says, “They need to promote more of the what’s going on around town. They have an app and social media that they should make more use of.” They’re also only a couple miles from a lake which provides other types of activities. If students get sick of the campus or town, Des Moines is 45 minutes away, so there’s easy access to the bigger city. The Student Activity Board runs airport shuttles for break, and there’s a bus that stops in town that’ll run to Des Moines and Chicago. 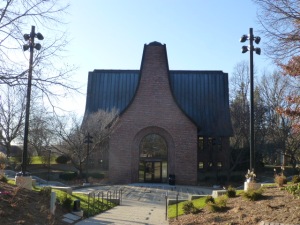 They don’t have traditional dorms on campus; they’re all suite style with a common room, bathrooms, and bedrooms. “They have a lot of lounge space, and upkeep is good.” Freshman suites often hold 7-8 students so they have a core group of people to get to know. Upperclassmen suites are usually a little larger, and there are multiple townhouses on campus for upperclassmen, as well.

“We have a relationship with the Reform Church, but we are not affiliated with the church, if that makes sense.” There are scholarships of members of the church. There is a beautiful chapel on campus, but other than that, there’s no real sense that there’s any relationship with religion (no sculptures, crucifixes, etc). Students are not required to attend chapel services/masses, nor are they required to take classes.

Academically, the school promotes exploration. They want students to explore as much as possible. Students don’t try to get a leg up on each other; the atmosphere is fairly collaborative. The general education core is typical Liberal Arts, covering a wide variety of topics. “They do a good job of innovating and revamping the curriculum. We pick the brains of students and faculty.” They have a week-long Career Kick-starter with hands-on workshops on Interview skills, resume building, etc. and will teaching them about internship opportunities. He’d like to see more money spent on renovating some of the older classroom buildings. They’ve recently completed Roe which is made of 80% recycled materials like banana peels in the floor! 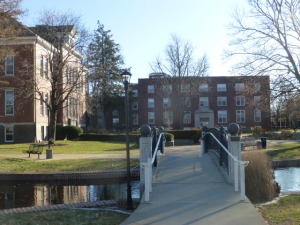 The bridge is supposed to represent the bridging of academics (the Liberal Arts) but also of people and ideas.

The rep is proud of the diversity initiatives, many led by students, that have been put in place since he arrived on campus several years ago. The week after I visited, he said there were going to be multiple Diversity and Inclusion discussions involving faculty, staff, and students. “They try to promote a culture of inclusion here. We’re always asking, How can we improve things? What issues are students facing? In defense of the college, they were not as aware of the issue before and had the “if not broken…” attitude, but that’s changed.” Students are becoming more self-aware and understanding what the initiative is. “When it’s diverse, it’s more fun. You get to experience a lot more and learn a lot more. It speaks to the development of character, as well.”

I asked him what it was like to be what it was like to be in what I imagined was a fairly significant racial minority on campus: “Initially it was overwhelming being here as a student of color. Students coming in need to be prepared. They will be the minority, but we’re yielding more students of color so we’re changing the tune of voices here. We’re trying to better ourselves and educate ourselves. Now it’s become more of an education and then we’ll transition into the phase of brainstorming and implementation.”

There’s no application fee and no essay “so they don’t lose anything by applying,” but they’re not currently using Common App. Their cost of attendance is just under $50,000 with 2 levels of scholarships (4K and 8K) and Scholar Day possibilities that are stackable.

The rep ended with this: “The things that happen here may seem small, it may seem insignificant, but it’s going to allow you to thrive in the real world! Check out the numerous opportunities, the character development, the professional development which is so underrated! There are so many intricacies at a college like this that are not taught at the DI and DII levels! There are top-notch individuals here! This is the type of education you want.”