This is a small Quaker college in a large town in Iowa. The rep, a recent alum, said that she often gets asked, “Why come to small town Oskaloosa?” Her answer: mostly for sports. Many students come from out of state (often the Southwest and other Midwestern states with fewer DIII schools) to play. They just added lacrosse and men’s volleyball; they’ll be adding women’s wrestling and shooting next year. They do get some transfers who didn’t make it at a DI school. Because they’re NAIA, they’re allowed to give athletic scholarships. Academic and athletic scholarships are not stackable; students must choose if they qualify for both.

I’ve been to some other Quaker colleges (such as Earlham, Haverford, and Guilford) that totally impressed; this one still has some work to do – but I think they’re trying. Although affiliated with the Quakers, nothing is forced but religious life/Meetings are there for those who want it. Students do take an 8-week Quaker values class, but “by no means do you have to believe what they believe. My Catholic grandmother freaked out because she thought they’d convert me, but that’s not what this is about. The class is just an introduction to the basic tenets so you understand the underpinnings of the school’s values.”

Academically, they offer a fairly typical array of majors and minors except for a few areas. It’s unusual for a school this size to offer Industrial Technology, Engineering (including Software engineering), and Accounting (Public or General). They have a Solar Lab, Media Proeduciotn, and Communications Research Institute. Nursing is now a full program (instead of RN to BSN). They do need to grow some of their offerings (such as they only offer a chemistry minor instead of a major), and some of their facilities need work; departments are tucked into whatever spaces are available. The Education department, for example, seems to be an afterthought up some random stairs snaking through an old building.

The biggest classes cap at about 35 students. The rep’s smallest class had 4 (“It was Comp 2, but I took it in the fall which wasn’t the typical time.”) Her next smallest had 15. “Professors will know you whether you want them to or not.” She chose to come here because she didn’t want to be a number. “I grew up 2 blocks from the University of Northern Iowa. It wasn’t for me.”

Hallway of the new dorm

The best change that the rep has seen over her time here is that they’re getting more students (there are 1001 students on campus right now) and there are more things to do. They’ve built some new dorms that are fairly extraordinary with suites. These are located across the main street from campus (there’s a pedestrian bridge). There’s also an older dorm that had been closed but, but they’re renovating them one wing at a time. The rooms open to the outside like an old hotel (and frankly looks a little creepy!). “We try to only put juniors and seniors here because they’ve already established community and know the ropes. It’s a little less secured and there’s less “supervision” so to speak so we want the students who are more independent to live here.”

The older dorm that’s getting renovated

There are some things to do in Oskaloosa (Osky) but “It is kind of quiet. You can get bored sometimes, but Des Moines is only an hour away. The town is getting better this year about advertising things going on.” She said that it’s easy to get a job in town and they’ll work around the students’ class schedules. 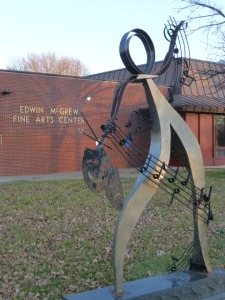 They’re getting better about having things to do on campus, too. A few things she mentioned were Human Foosball games, ice cream socials, and Greek Life. None of the chapters are national and there are no Greek houses “so you don’t get the party vibe.” They do community service, keep a minimum GPA, and provide a community for students. Her chapter won the Governor’s Award last summer for doing so much community service. “It’s more a resume builder; it just gives more opportunities.” They also sponsor Greek games when people pledge in go to a sporting event to support the players. 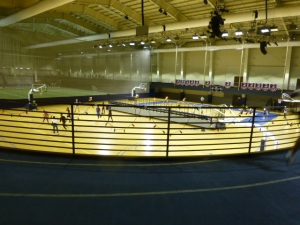 She said that 80% of students are involved in at least one extracurricular activity (which seems a little low to me). Classes are built around that: all of them meet between 8:15-3:05. Sports and other extracurricular run from 3:30 to 5. Evening classes start at 6. “We don’t want them to have to pick between classes and extra-curriculars.” Sports do seem like a very big deal here. The Admission and Financial Aid offices are actually located in the PAC (Athletic Center) so I was able to see several teams practicing – the track team was on the 2nd floor track overlooking the courts where multiple teams were holding their own practices. They also have a Dance Team.