The tour guide at Muhlenberg was one of the best I’ve ever had! If the other students are half as much fun as him, I can see why people really want to be here. “There is a palpable sense of welcome here. People hold doors. I hope you get the sense that the students matter … because they do. They can be their true selves while they are with us,” said one of the reps.

The rep went on to talk about what makes Muhlenberg distinct; I found this refreshing since most schools don’t – or can’t – articulate this.

As a member of the Lehigh Valley Association of Independent Colleges, Muhlenberg students can cross-register at the other 5 schools, but because they have such a range of options on campus, they usually do not. However, there are some groups that collaborate, students are able to attend events on other campuses, etc.

Faculty are “fiercely devoted.” They are invested in who the students are and who they’ll become. Students make things happen every day at Muhlenberg and they’re empowered to collaborate with administration to make that happen. For example, they now offer a Public Health Major; prior to 2016, this was a minor with over 100 people in the program. Because of student engagement, they made it a major, and there are 2 partnerships with BU and in Philly that wouldn’t have happened without the students pushing for it. 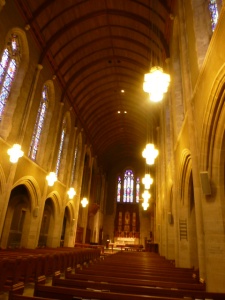 “We want to fill our seats with people who want to be here. We fill almost half the class through ED.” They will do an early read for merit and financial aid if that’s an issue before they enter into that partnership. Interviews are really important here; they value that interaction and getting to know students. They’re armed better in committee to advocate for the students.

“We don’t just have one friend group because we all do so much, so we know a lot of people who we go to support,” said the tour guide. Almost all students live on campus which helps build community. Their DIII and club sports teams are popular (to participate in and to watch) as are all the artistic performances. About 20% of students join Greek life. Traditions are really important on campus. Our tour guide said that his favorite is Candle Lighting. At Freshman orientation, they receive their candle which they light; they keep this all 4 years and will relight it again the night before graduation with their families looking on. “Usually it’s lit by alumni while an a capella group sings the alma mater right. It’s kind of transcendent. Generations before us did this. I’ve lost my laptop, but I know where that candle is.” 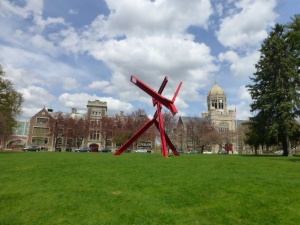 Campus is mostly attractive; there’s a large sculpture that looks very out of place against the stone buildings: “Its name is Victor’s Lament,” explained the tour guide, saying that it was meant to represent a wounded soldier being carried in Vietnam. After it was donated to the school, it was painted red because of the school colors. The sculptor was furious and withdrew his other donations.