“PLU makes you figure out who you are,” said one of the tour guides. Students and professors alike tend to be inquisitive and engage in critical thinking. “People learn quickly that their personal view isn’t the only one or even the right one. It doesn’t mean you have to change your ideas or that you’re wrong, but we acknowledge that our own experience is limited. We listen and engage with each other,” said another tour guide. 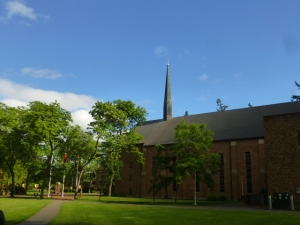 PLU is 1 of 2 ELCA schools on the west coast (the other is Cal Lutheran). “There are several flavors of Lutheran. This is the most liberal branch.” They espouse the Lutheran philosophy of higher education as well as freedom of thought and expression. There’s no statement of faith required by staff or students, but there are 2 class requirements, 1 Christian-based and one global. “You can get very theological or not,” said a student, referring to the choices for these classes ranging from the Hebrew Bible to environmental ethics to Native American Religions. There are even travel classes such as Ancient Religion in Greece or Asian Religions.

Like the Jesuits, they tend to be highly inclusive; graciousness and hospitality are also hallmarks. People of most – and no – faith feel comfortable here. Last year’s commencement speaker was Muslim, the immediate past president was Episcopalian, and the current president “is no flavor.” Care is intentional here which is not seen in many mission statements. Teachers have 2 jobs: teach and be a mentor. “Students know that we have their backs.” They’re clearly doing something right with an 83% graduation rate within 4 years which is nearly double the national average. 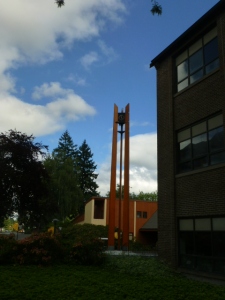 Located in a residential Parkland, PLU is 15 minutes away from downtown Tacoma by bus and 45 minutes from Seattle on a good day. “On a bad day, we don’t talk about it.” There are a few blocks of restaurants, cafes, and stores right off campus with apartments over them, many of which are rented by upperclassmen. Students can use their dining dollars at 208 Garfield and a pizza place; there’s also sushi, Vietnamese, Starbucks, and more within walking distance either on that stretch or on Route 1, the main drag through town. There are plenty of outdoor activities available in the area (and this is the closest university of Mount Rainier). 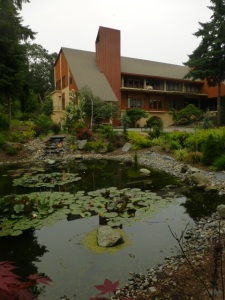 One student said, “We’re stereotypical Pacific Northwest: pretty liberal and accepting.” This was mirrored by one of the admissions reps: “As with most of the region, we’re left of center.” There are people on all parts of the political spectrum, and they engage in dialogue. This is a safe space to have the discussions, and students will listen to each other.

One of the dorms

There’s a 2-year residency requirement but housing is guaranteed all 4 years and about half of the students stay all 4 years. On-campus students have higher overall GPAs and higher graduation rates. All but 1 of the residence halls have linked learning components. Old Main is the only all female dorm with an empowerment hall. There are 3 non-gender/coed wings that students can apply for. The Lavender Wing is for LGBTQ students and allies. There’s First-Gen floor (43% of the students are First-Gen) and another for students of color (more than 25% self-identify). There’s an active Diversity Committee and an annual POC retreat. 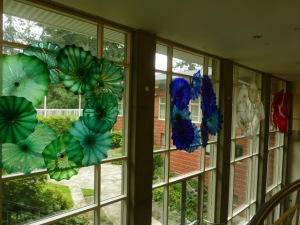 Food gets high ratings from the students. The dining hall employs an executive chef who plans menus. “It gets creative. We get things like Taiwanese beef stew, Pacific Islander meals, schnitzel and brats, Norwegian, Korean short ribs. One of the favorite traditions is State Olympics: each group brought a “State Game”

Although there are only about 2,700 undergrads (70% of whom come from within 100 miles of the school), PLU is considered a comprehensive Liberal Arts school because of the professional schools (business, education and Kinesiology, Nursing). “There’s a healthy tension between the Liberal Arts and Professional Programs here. Part of the mission is Vocational Discernment. It’s very real world here!” said one of the Deans. Some of their stronger or more unusual majors include:

The biggest class students will ever see is 40, but classes average under 15. Even the largest lecture halls don’t have more than 80 or 90 seats, and these are used for visiting speakers. “Missing class isn’t really an option.” Some of the students’ favorite classes included:

All students complete some sort of capstone which could include an internship or research among other options. The results of the capstone have to be presented to several professors at the end. Research can be “as far as Africa and close as Rainier.” Facilities on campus are also amazing: graduate students from UW come here to use facilities to analyze atoms/molecules. 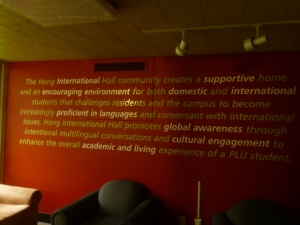 This is the first American university to offer Study Away programs on all 7 continents at the same time. About half of the students participate in at least one program; about half of those are during J-Term. Only 4 programs are domestic.

Applications are free on Common App. A “3.3-ish GPA will start qualifying students for merit aid,” said one of the reps. There are 5 full-tuition scholarships which are competitive. They offer Fine Arts Scholarships (requiring an audition) ranging from 1,000-10,000 for music, theater, dance, art, and speech & debate.

One thought on “Pacific Lutheran University”