“What happens in the buildings is way more important than the buildings (which are still phenomenal),” said the school’s President. UIndy is a comprehensive liberal arts school with about 4000 undergraduates. “Some kids come in with a laser focus, but many don’t, and we kind of like that! The first year is meant to expose them to the range of options so they can start to articulate passions. We draw an involved faculty who are interested in helping students see the relevance in what they’re studying and to help them articulate what they’re passionate about.”

This fall (2017), they’ll bring in 1,150 freshmen with 52 nations represented (China is the most highly represented with 250 students followed by 175 from the Middle East). Incoming freshmen had an average of a 3.52 GPA. Because UIndy is so focused on engagement, they’ve hired more staff and added more programs. Even with the enrollment growth, the student-faculty ratio dropped from 15:1 to 12:1.

They’re committed to keeping prices down and providing robust financial aid. They feel that this is one way to demonstrate an ethos of “Education for Service,” their motto and something they want the students to learn to apply as well. Even their sports teams have won awards for being first in their conference for community service. The athletics tend to be strong here with 600+ students in 23 DII sports, 15 of which have gone on to post-season play.

Students are smart and interested in their educations. “We’ve redone the library, It’s is no longer a book depository. It’s an idea factory. There’s a line at the door at 8am and we’re kicking people out at midnight,” said the President. That doesn’t mean that academics are all they do OR that they have a single focus. Students tend to have multiple interests in and out of their majors. Francesca Zappia is one of their recent alums; she was a computer science major who also loved to write. Now she’s a published author with her second novel coming out this spring: John Greene said she’s the next big thing in that genre!

Health Sciences are strong here. They even have a cadaver lab for undergraduates! The new Health Pavilion is a gorgeous building with intentional architecture to give students a taste of what the professional life will be; it’s also a place for the community to come together. One of the community hospitals has space there providing clinics (PT, OT, and psychological) for students and the surrounding community. More than 96 clinical placements for students are available on site. This is the first school I’ve visited that combines a PT or OT program with Psychology, Anthropology, and Public Health Education & Promotion. 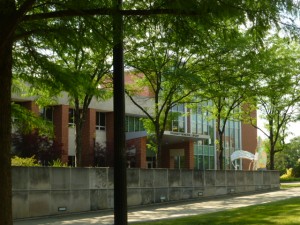 They offer an accelerated 3-year BSN: acceptance depends on how they do the first year and then go year-round after that. Nursing itself is not direct-entry; students complete their first year and apply. The minimum GPA is 2.82; the GPA for a fall entry tends to be higher than that. There are 80 spots in the fall semester and 64 for a spring start; “there’s rarely not a spot for students who qualify and want to be in nursing,” said the Dean of Health Sciences. “Some may have to wait until spring to start, however.” If this is the case, they’ll graduate a semester late since there is no way to catch up over the summer with the clinical rotations.

They added 6 Engineering programs 2 years ago, and they’re phasing out the 3+2 program because it’s no longer needed. The design aspect, project-based learning, and unique curriculum makes UIndy’s engineering stand out. They complete 10-week intensive courses followed by a 5-week design experience. The university built a new maker-space supporting collaboration in a realistic setting, and they are able to utilize engineering concepts on projects with real clients.

The new living communities has driven engagement and increased retention. There are 7 dorms, 3 of which are predominantly for first-year students. They’re coed by wing with keys only for that wing. Food is “pretty good” according to the students, “especially Wing Fridays.” The tour guide said that he had 2 traditions he would miss after graduation: Homecoming and the Celebration of Flags, an event held at the beginning of every year where students from different countries hang their flags in the student center. He also said that “President Bob” is well liked by the students and holds highly-anticipated and well-attended events at his house every year such as Super Bowl and Election Result parties.