One of the new buildings on campus

This is a small, private, Christian college founded by Baptists in 1885 with 400 students on campus; including their extensive adult education, online, and extension programs in 3 locations around Indiana, their undergraduate population hovers around 1200. This is 1 of the 2 lowest costing private schools in IN (usually alternating with another for lowest cost).

Freshmen walk through this arch as part of orientation; the other side says “Exit to Serve” — they walk out from that direction at graduation

OCU is a good school for students who want to get athletic scholarship money but who know they aren’t going pro. Over half the students play on one or more varsity teams; they must live on campus (unless within commuting distance) and sign pretty strict behavior agreements (including not drinking, even if of-age and off campus). They have all the “traditional teams” such as basketball and soccer. I get the sense (as did some other counselors on the tour) that this is the place that a lot of students attend in order to continue playing sports and get their education along the way … rather than coming to get an education and happen to play sports in their free time.

Other than the Chapel, there is little around campus to indicate the school’s religious affiliation. Chapel service is offered at 11am on Wednesdays when nothing else is scheduled – no office hours, no classes, and even the bookstore closes down. However, attendance is never required. “If you have something else you want or need to be doing, more power to you.” Students are required to take 2 religious courses: New Testament and one another. “A lot of people who aren’t Religious Studies majors take Old Testament. It’s easier,” said the tour guide. There are some typical rules around campus that you’d expect at a religious school: it is a dry campus (although students can drink off campus unless they’re athletes who sign pledges not to drink), and inter-visitation is pretty strictly monitored (doors must be all the way open, only allowed during certain hours, etc). 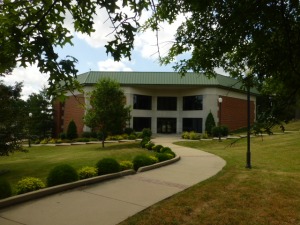 OCU currently has 4 single-gender dorms. Dorm Wars (a college version of a high school Spirit Competition) is a big deal, apparently. Dorms have colors assigned, and they’ll have games and other competitions throughout the year where students can win gift cards. The tour guide was pretty excited about Water Pong … There are two big building projects for campus including a suite style dorm and an alumni center. Part of that will have restaurants (including a drive-through) which will be accessible to town residents as well.

One of the dorms

Weekends are quiet. There isn’t much in the way of planned activities, our tour guide told us, but they’ll usually head to other schools and hang out. The town is also small and quiet. I asked her what there was to do within walking distance. “Well, there’s an ice cream place….” Driving away from campus took us by some houses and then quickly into farmland. Cars would be pretty essential here even for basic shopping trips. All students can have cars, and parking is free and not hard to find. 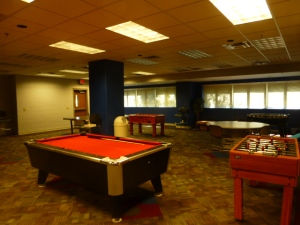 Classes are hands-on. The tour guide’s biggest class had 20 in one of her Gen Ed classes; now she’s often in classes of 3-5 students. Students on campus are allowed to take 1 online class per semester if they want. Their 3 biggest/most popular majors are:

They also offer a Seminary program.

For merit scholarships, they don’t look at test scores and base it all on GPA. Students with about a 3.75 qualify for the top scholarship of $10,000. There are also athletic scholarship of up to $10,000 (which are not stackable with merit).