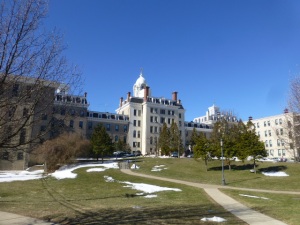 The main building on campus

This is a small, Catholic school that had been single-gender until last year when it became “fully coeducational” in 2016. The male population quickly jumped to about 40% within the year. It’s a safe campus in a residential area, and while there are no longer shuttles around town provided by the school, the train station is right outside the school gates. NYC is an hour away. Only about 2/3 of students live on campus and they pull a lot of students from the local area.

This is still heavily Catholic with Sisters living on and around campus. There is a Mass during orientation, and they’re offered daily but not required.

The train station just outside the gates

I’m not sure about this school. It’s definitely small (both in size and population – they enroll under 1000 students) and manageable. Students were out even on a chilly morning around 9:30. There weren’t a ton around, but that’s normal for that time of day. However, graduation rate hovers around 50% in 6-years. I get this impression that students want a larger campus, and some students who came here for the single-gender experience left when it went coed. I’m not sure it offers anything unique to draw students from a distance; there are other small Catholic schools around. I just didn’t have a sense of what distinguished this one, unfortunately.

The campus greenhouse; don’t see too many free-standing ones on campuses!

I talked to a senior majoring in Sociology, “I still have no idea what I’m doing after graduation.” She loved that it was a small school. “It’s easy to get around and I know everyone at least by face if not by name.” She was surprised at how welcoming everyone was. “You’re not an outsider here.” She told me about how during orientation, she ended up having to go to an event before her mother left and was unable to say goodbye. She was in tears, but people she didn’t even know came over and hugged her.

The academic offerings are limited, but students are allowed to take classes at Drew and at the nearby Fairleigh Dickenson campus. “There’s a path that leads right onto their athletic fields. It’s easy to get over there.” Drew is about 10 minutes away. She had a friend take music classes there; she didn’t have a car, but the school got her transportation over.