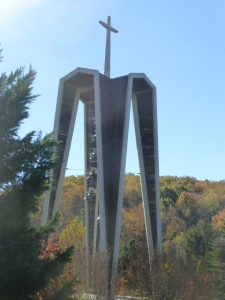 Ferrum is “small but has connections I appreciate.” It’s safe, friendly (“people talk to each other”), and not so big that you get lost in the crowd. The mission is about access for a range of abilities: “The college was set up by Methodists (a socially-engaged religion) to give students in this part of the state access to higher education. It’s about people and upholding the historical mission.” Students are 60% PELL eligible and 30% First Gen. It’s a diverse, inclusive community. Currently, they only have about a 60% retention rate that they’re actively trying to improve with the Gateway Seminar which provides mentors for freshmen.

An intramural field with a dorm in the background

Sports are a fairly big part of the culture here. “I was told that 75% play sports, but it’s less than that,” said one student on the panel. “Maybe it hits that high if you add in all the intramurals and clubs.” One student said he’s like to see more funding for club sports: “I had to pay for a lot of things out of pocket.” Ferrum live-streams away games so students can watch from campus. One of the students who came originally to play sports (and no longer does) says, “Sports were grueling, but one of the most rewarding things on campus.”

People do plenty of things beyond sports. This is a mostly residential campus so students are active in clubs and activities. Most upperclassmen dorms are great, but the students seemed to agree that the freshmen dorms could be improved. Off campus, there are plenty of outdoor activities; Ferrum definitely play up their location among the Virginia Blue Ridge Mountains. They do have “some equipment” that students can use for free, but it didn’t sound like a lot. Freshmen can have cars on campus, and they also have a bus system. Parking “is there, but it isn’t always great.” 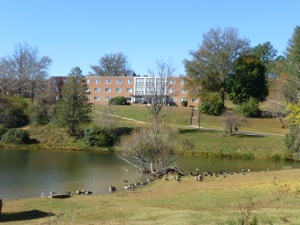 The pond with dorms in the background. The Blue Ridge Institute and Museum are also on that side of campus

The overwhelming favorite tradition on campus was the Blue Ridge Folklife Festival. It’s an annual event with Appalachian Mountain activities. Everyone gets involved and volunteers. “I’ve been coming to the festival since I was born. It was another reason to come to Ferrum,” said one student on the panel. Another from out of state said, “I’m understanding more about the culture all the time.” When I asked our tour guide about any other traditions or annual events, she finally said that Homecoming and the bonfire on the intramural field was usually well attended, but other than that, there wasn’t much. 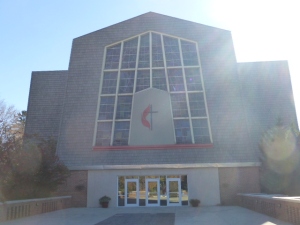 Chapel services are held on Monday nights (“What college student wants to get up on a Sunday morning?” said the tour guide) and are optional. However, students do need to take a Bible-based class (“We use the King James version”) and a religion/philosophy-based course. 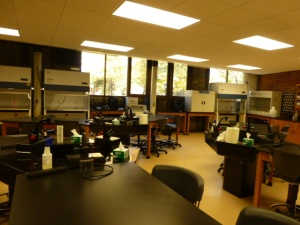 The tour guide’s classes ranged from 8-22 students. Her anatomy class was her favorite: they got 2 bodies from the Body Farm in Kentucky to work on. Some students would like to see the academic programs expanded. The majors that are offered are fairly standard with a few exceptions: In their School of Natural Sciences and Math, they offer Agricultural Sciences (“ the farm has 12 head of cattle and 6 sheep. I’d like to see the livestock numbers improve,” said one student), Forensic Science, and Environmental Planning and Development. Democracy, Justice, and Civil Engagement as well as Recreation Leadership are housed in the Social Sciences and Professional Studies Department.

There are a few more unusual minors such as coaching, ecotourism, and Russian Area Studies.

The Honors Program requires students to study abroad (it can be in the E-term, a semester, or a year); they’re provided with a $3000 scholarship to go abroad. Honors students live in the same dorm.

E-Term, a 3-week term in May, lets students go abroad or study away. One student went on the International Comparative Law trip to England. Others have gone to the US Virgin Islands (Tropical Marine Ecology) and to Ireland. Other students take advantage of semester and year-long study abroad or study away programs. One of the students on the panel was planning on spending a semester at the American in DC and wants to intern with the Supreme Court.