If you want to study meteorology in a small school or brag that Robert Frost taught at your alma mater, this is a place for you to check out.

“I was surprised at how friendly the place is. It’s a hold-the-door sort of place,” said one of the students. It’s a homey atmosphere, the type of place where a professor will run a Stitch-and-Bitch on a Friday evening in a dorm and have 40 kids show up.

People describe Plymouth as a transformative place: “it’s almost a “do-over/start-over” place where students who maybe didn’t think that they were college material come and realize that they are. They can hit the reset button here. They can move into a future that a lot of them never imagined for themselves,” said one of the reps. A student agreed: “I’m a better student now. I’m actually doing my work and getting As and Bs.”

Typical fall colors when the morning fog burns off

Students who haven’t found their voice yet often do well here. They have to engage in the process and understand what they’re learning because they apply it in a lot of classes. They’re responsible for it during group projects. “My biography does not preclude my destiny. If you’re not good at math, you know what? We have math classes here!” said another student. “No matter where they start, development happens,” said a rep.

Early morning walk to class in the fog

Lazy doesn’t work here. Students are “gritty and willing to work hard. Most are not coming from affluence. They’re willing to work for things and want to take advantage of the opportunity because they know that not all kids get that,” said a rep. The kids here are “often on the cusp of finding their passion. We do really well with kids who have heart and spirit. They’re good kids. That doesn’t mean they don’t have their hot-mess moments, but they have heart.” That being said, they recognize that their graduation rates need some work.

There are several things in place to help PSU students succeed. One is the existence of first-year success coaches. They take the “GPS approach: think of it as a roadmap. We know the way and what’s ahead.” Students get a nudge/reminder via text, email, etc when something is coming up “or missed a turn.”

Plymouth has taken a deliberate stance towards “rebuilding the liberal arts.” They spend time asking themselves, How are they going to let students be transformative, to come out of school and be ready to take on challenges? The result is a redesigned core curriculum (starting the 2016-17 school year) revolving around 7 multi-disciplinary clusters:

For a school this size, 50 majors and 60 minors is impressive. The largest enrolled departments are: business, CJ, Education, Envi Sci & Policy, and Health and Human Performance. Things to brag about include:

Class sizes for students on the panel ranged from 9 – 32. Their favorite classes were: 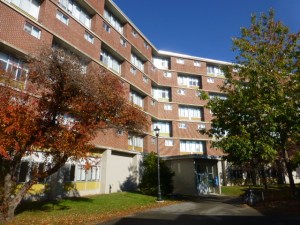 One of the biggest dorms, and the tallest point in town.

Over 40% of the 4,100 students come from outside NH, although 90% of the population is from New England and the Mid-Atlantic. There are some buses running to Logan, Concord, and Manchester. They’re seeing an increase in the international population including a lot from Sweden: “I think they come for the hockey and maybe soccer,” said the tour guide. There’s an athletic culture here: about 80% of students participate in some form of athletics, whether on one of the 24 DIII teams or in club/intramural sports.

One of the dorm kitchens

96% of students live on or within 1 mile of campus. Housing is available all 4 years. A new Res Hall with 288 beds is opening fall of 2017. Freshmen are integrated into dorms; there’s no separate building. Weekends are less than busy, but there are certainly things to do. Skiing is popular (Cranbrook is only 20 minutes away). Before graduation, the students on the panel said that students have to:

Admission is Rolling; their app is free (Common App costs $50). Students only need 1 letter and NO test scores: they won’t look at scores even if they’re sent in!