Exterior – you might recognize this from The Amazing Spiderman 2!

Eastman is technically part of the University of Rochester, but is located downtown, about a mile and half from the River campus. It also has its own admission requirements (and provides its own financial aid, as well). However, students can take classes at the River Campus (they can even complete a minor there) and Eastman students can take advantage of any of the social and athletic opportunities, as well. 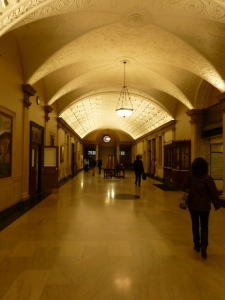 The main hallway in the main building

Eastman is mostly housed in an old, large building with a newer modern building across the hall (among other things, this houses offices, the bookstore, and the Sibley Music Library – the 2nd largest music library in the world after Oxford). The dorm tower and quad located across the street. Students are guaranteed a single room after freshman year. 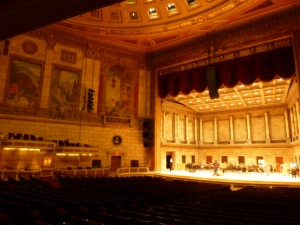 The main building is a 3-story building (4 if you include the basement) with classrooms, concert halls, and practice rooms. Kilbourne Hall is one of the oldest, built in 1924, and has been maintained to look the way it was when it was built. It holds chamber groups and senior recitals as well as other small concerts. The Kodak Theater (previously the Eastman Theater before the renovations) is their major theater; it used to be a silent movie theater. The renovations brought the back wall in away and created a space for a lobby and a café as well as box seating within the theater. Hatch Hall is acoustically adjustable and acoustically isolated. The curtains in the walls can be adjusted based on whatever is happening in the theater: “a solo oboist is very different from a drum ensemble. Same with the isolation. When you have the number of concerts that we have on campus every year, that’s crucial. You can have a drum ensemble here and a Verdi opera happening next door and you’d never know.” (There are also a couple other recital spaces including an Organ Recital Hall). 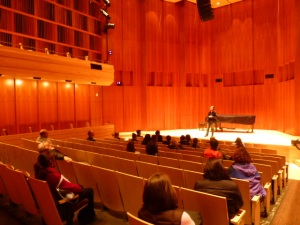 Theaters are wired with high-tech recording devices as well as skyping and other technology. All performances are recorded and kept in the Sibley Library. The technology also allows them to connect to master classes and other musicians around with world without ever getting on a plane.

The annex is a practice building that is open from 7am to 11pm. There is no practicing allowed in the dorms. Low brass, piano, bass and harp players have their own locked practice rooms due to the size of the instruments. For others, it’s first-come, first-served. There are rush times for rooms “but you learn quickly when this is and work around it.”

Students will practice 3-8 hours a day. Kids were walking around with Eastman sweatshirts that said: Eat. Sleep. Music. They aren’t lying. “I wish I knew that before I came; I think it’s one of the things that surprised me the most. What took me a month to prepare in high school takes me a week here,” said the tour guide. 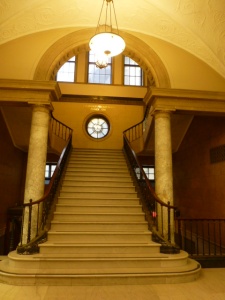 In terms of admissions, “the best thing I did was take private lessons with one of the professors here.” On the application, they can put down their first and second choice for their faculty member. “Do your research: if you aren’t happy with your faculty member, that can make or break your time here.” Selectivity depends on the instrument and how much space each faculty member has. “One faculty might be graduating 6 seniors, another none, even for the same instrument.” The most popular instruments must send in pre-audition screening CDs; if the faculty like it, they will be invited to the on-site audition. This audition matters; they have to pass that before the admissions office looks at transcripts and other things. “Good grades won’t get you in but bad grades can keep you out.”

Performance is the biggest major on campus, but Composition, Conducting, and Music Education are also popular. All classes that the students need are offered at Eastman, but they can choose to take the education classes on the River Campus if they’d like. Education majors must gain proficiency through 4th grade level for all orchestra instruments. However, not all Eastman students continue on into music: lots of people actually go onto law or medical school. “We do pretty well getting in; I think they recognize the level of commitment needed to play at this level, and they know we’re dedicated and will get the work done.”

The tour guide wanted people to know that “this isn’t a sterile, boring, cold conservatory. It’s a welcoming place. There’s a robust social life and a lot of stuff going on right on the block.” Students also go skiing in Bristol, apple picking, hiking. They also take advantage of things on River Campus such as clubs, sports, and Greek Life. “There’s a tremendous amount of respect because we know what it takes to get in here.” The competition is with themselves, not with others. “We want to make ourselves and our professors proud. We help each other out and will give each other honest, helpful feedback.”