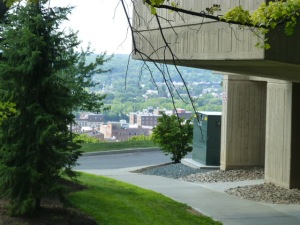 The city of Troy as seem from campus.

Located up the hill from downtown Troy, RPI is a beautiful campus with eclectic architecture ranging from a new glass performing arts center to an old armory. The university itself feels very separated from the city even though it’s mere blocks away from downtown. Troy itself doesn’t have a great reputation, but the university itself is in a nice, relatively safe neighborhood.

The university has a long-standing reputation for engineering. In fact, it was the first university to offer civil engineering in the English-speaking world. Don’t let this reputation fool you, though. “I was surprised at the students. I thought it would be full of engineering nerds, and it’s not that way at all!” said the tour guide. Unfortunately, that was one of the few times I could get him “off script” so I don’t feel that I have as good a grasp on what life is like on campus – other than students are active and very focused!

One of the Frat Houses

RPI has a 92% retention rate so they’re doing something right. Almost 1/3 of students affiliate with a Greek organization; Greek houses are located all over including downtown (although this can be a bit sketchy; Troy as a whole doesn’t have a great reputation – but the campus itself is in a nice, relatively safe neighborhood. Just be forewarned!). The university has one of the few student–run unions left, and they’re controlling an $80m budget. Clubs range from Cheese-lovers and Cheerleading to Quidditch and What is a Club? Club. The largest lecture hall on campus (in addition to holding a couple classes and sometimes exams) is where they show $1.50 movies every weekend.

A couple of RPI’s bragging points:

Students must live on campus freshman and sophomore year. The freshman quad has 7 buildings: 6 with doubles, 1 with triples and quads (2 rooms and a bath). Freshmen can’t have cars, but all students have access to the free public transportation, and the school runs shuttles to the Albany airport and the train station.

Co-ops are open to all students and are completed over a semester and a summer. During this time, students are not officially enrolled at RPI so they are not taking classes or paying tuition. Co-op students go wherever the company sends them; they’re paid and are sometimes given housing. Only about 30% of students complete this because many don’t’ have time to take a semester off from classes and still graduate on time. Those who do co-ops usually come in with credit or will take some extra classes here and there. Internships mostly are during the summer. Students can get paid OR get credit, but not both. About 70% will complete an internship. About 80% of students who do internships or co-ops end up getting a job with that company.

Engineering is the largest school at the university with about 50% of each incoming class entering this division. Undecided students can have until the 3rd semester to declare one of the 11 specialties within this department. The school puts a strong emphasis on practicalities with a Professional Development sequence built into the curriculum. For example, some lectures discuss soft skills (presentations, communication, etc.) needed to be successful but are often glossed over in many engineering programs. 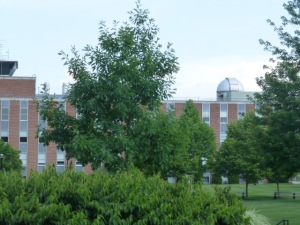 The Architecture school admits approximately 70-80 students a year. Applicants must submit a creative portfolio of drawing, painting, etc. They don’t want technical or CAD Drawings. Students can choose between the 5-year BArch program or the 4-year Building Science program. BArch students are ready to sit for the certification exam. Students wanting to study off campus can go abroad for a semester in China, India, or Italy, or they go to the CASE program in NYC. 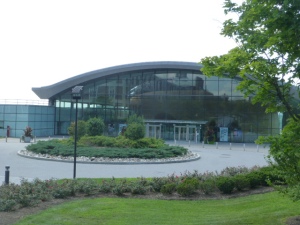 Business is another small school accepting maybe 50 students per year. The only Bachelor’s degree they offer is in management Tech, but students can minor in subjects at any school as well as complete concentrations within the business school. Students coming out of this program boast an 89% success rate with start-ups. 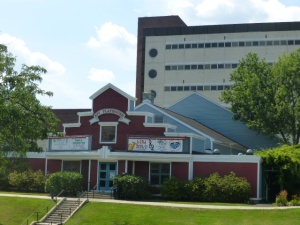 The department that most people don’t expect to find at a school like this is Humanities, Arts, and Social Sciences. They call this the “liberal arts school for the 21st Century.” All students have to take 8 courses (24 credit-hours) in this division. In fact, many students dual major with a major in HASS OR complete a co-terminal degree (BS and MS in 5 years). They’ll Students coming in with AP credits can use some of them towards this requirement. Like in other divisions, they place a strong focus on teamwork and collaboration. For students looking for the co-terminal degrees, RPI extends scholarships and Financial Aid for the 5th year by letting students retain undergrad status.

RPI offers several accelerated programs; students selected to participate in these programs may not double major, and those in the Med program must be US Citizens.