One of the most distinctive parts of Albright is their “co-major” program. Rather than simply designing their own major, students can link 2 half-majors to create a new one. Each major has a designated “co-major” track with 7 required classes; unlike completing an entire major, there is no flexibility in those classes.

The arts are huge here; the college was named in the top 25 nationally for artistic students. Non-majors still get involved in improv, a cappella, music, and acting. “You have to earn your spot at the table,” said a Theater Professor. “If you’re a freshman and you’re the best choice for the role, you get it over the senior. We have bio majors getting parts over theater majors. There’s no free ride.” One of the theatre majors said she picked Albright because of what she could do. She said this wasn’t a snooty place, unlike other places she toured. “I don’t care who went there; I care what I’m going to get to do. No one is working with that famous pop star so it doesn’t matter.”

The more traditional looking part of the campus

Students come up with project ideas and pitch them to faculty. The common response is, “What are you waiting for? Get to work!” A student on the panel is spearheading an initiative to turn a dorm court into an artistic community. There’s an unused space in the basement that they’re going to use as a theater space, prop storage, etc. They’d also like to create a student gallery. “The first student open mic session is going on this weekend.

Students have to attend at least 16 cultural activities to graduate. “They mean it,” said a professor. “We had a student not get his diploma for 6 years because he had only done 13 and dragged his feet doing the last 3.” About 90 options are available each semester ranging from speakers, student theatrical or musical performances, and Broadway shows that the school will take students to for free. 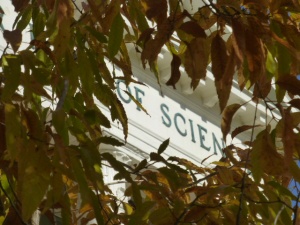 Although there’s a wide range of artistic majors and minors including Arts Administration; Digital Media, Studio Art, and Video Arts; and Fashion (including Costume Design), there are also many liberal arts majors to choose from. Some unusual majors and minors include: Psychobiology (with concentrations in Behavioral or Molecular Psychobio), Optical Physics, Music Business (complete with their own Record Label!), Environmental Chemistry, Holocaust Studies (minor), and Game and Simulation Development.

Favorite classes of the panelists include:

The smallest classes run in the single digits: the panelists’ smallest classes were: 6 in a theater class (as a freshman!), 1-on-1 vocal lessons, 7 in Advanced Acting, and 8 in a business class. Largest classes tend to be Gen Ed (28 in English, 30-ish in others. The largest class on campus is Intro to Bio which hovers around 80 with labs at 20). 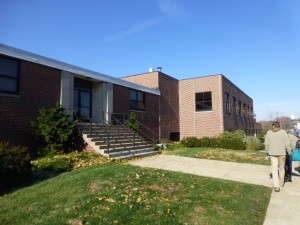 One of the buildings along the main road through campus

The school offers an optional 3-week January term; about 2/3 of students take advantage of it. They may attend every year but only get credit for two years. Classes run about 3.5 hours a day and tend to be collaborative or have a travel component. Someone just donated property in Costa Rican to the college; that will be used for some of these classes. Often, student use this time for ACRE (Albright Collaborative Research Experience). 15-20 students each year get a $3600 stipend with occasional more help to travel to conferences.

A computer in the new business center that can retract into the table.

Campus has two distinct parts: we started our tour at the new Business Center with state-of-the-art technology and innovative classroom layouts, including computers that “emerge” from the table-tops. That building (and many others) sits on a main street; we first thought that there was no “traditional campus” section so we were pleasantly surprised with the second section. One of the original buildings in this part of campus is supposedly haunted; they’ve had ghost-hunting tours in there. There’s a very small “pond”; a big tradition is getting “ponded” on your birthday. Someone was thrown in the night before we toured, even though it was hovering around freezing. 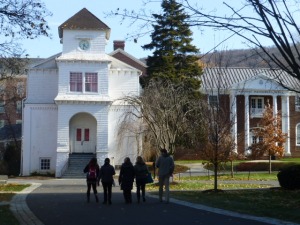 Students are happy with the dorms. Rooms come with a fridge and microwave, but there are only 6 washers and dryers for a couple hundred kids. “It’s a rule that you don’t mess with someone else’s laundry. If it’s been in the washer for more than 15 minutes, you can move it to a drier, but don’t turn it on. I almost never had to wait for machines, though,” said the tour guide

All students can bring a car; registration costs $15 a year. There are plenty of parking lots, “but a lot of people park on the streets around campus – you should learn to parallel park!” There’s some stuff to do within walking distances (pizza and Chinese food got several mentions) and plenty of shuttles: “There’s Target Tuesday, Walmart Wednesday, Theater Thursday…”. Day trips are common to Philly (1 hour), NYC and Baltimore (2 hours), and DC (3 hours).

18% of women and 12% of men affiliate with a Greek organization. Students rush 2nd semester and must have a 2.5 GPA. Hazing is taken seriously. “Last year, there was a suspicion of hazing, and that fraternity was banned from activities for a year,” said the tour guide.

There’s lots of school pride. Basketball is a huge deal; Alvernia is their big rival. Football also draws a lot of fans. Intramurals are popular, particularly softball and rugby.

Only 3% of the students are international representing several countries. The school just dedicated an area near their main entrance to fly each country’s flag. During the dedication ceremony, students raised the flags as their anthems played. International students need to submit TOEFL scores; they’re looking for a 68+ and offer ESOL summer classes if students need to improve.

Applicants can submit a graded paper (teacher comments are important!) in lieu of the essay but can’t use the Common App if they choose to do this. If they use the Common App, they can submit the graded paper as an additional essay through the “other” upload. Albright is test optional, but students must interview if they take this option (skype is fine). They’re considered for the same merit scholarships. The Admissions Rep recommends that if students they fall at or above the mid 50%, submit the scores.