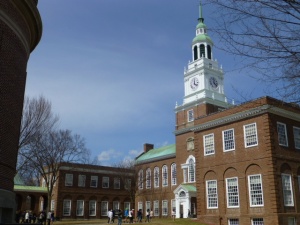 Every day at 4:00 pm, Dartmouth students can get tea and cookies for 10 cents in Sanborn Library, the main library on campus. Several years ago, the university was going to raise the price, but an alum stepped up to fund an endowment to keep the price at 10 cents forever.

Dartmouth looks like you’d expect: lots of old brick buildings surrounding a quad, but with enough modern buildings to keep up with the times. The Quad sprawls along a main street of Hanover, a quintessential New England town. Main Street has everything students need: great gelato (I tested it after the tour!), restaurants, and shopping. Because of their location, there are lots of outdoor activities such as hiking, skiing, and swimming. Although they’re relatively remote, the students don’t feel stuck. Each semester, Dartmouth runs a bus at least 7 times to Boston and twice to NYC. 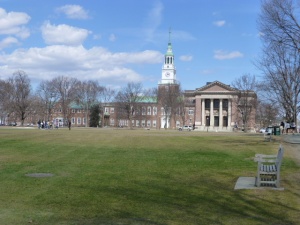 Nothing on campus is more than a 10-minute walk from the central Green, home to several campus traditions. One popular yearly event is the multi-story bonfire built by freshmen; they’re supposed to run around it 100 times plus the year of their graduation, but usually that’s too far so they’ll do the year of graduation only. 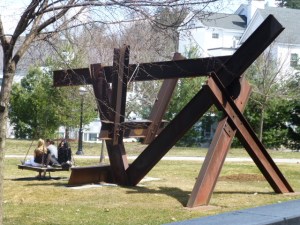 Interestingly, students refer to their class by year of graduation (“I’m a ’16”) rather than the traditional freshman, sophomore, etc. Almost all incoming freshmen participate in pre-orientation, 5-day trips in groups of 6-8 students. They choose from a variety of options such as hiking, nature photography, kayaking, mountain biking, and cabin camping.

Dartmouth is still called a college because of the undergraduate experience, even though they have grad programs. My tour guide said that her largest class was Chem 101 with 150 people (the largest lecture hall on campus can fit 180 students); on the first day of class, the professor started calling people by name because he had memorized who they are. Writing Seminars include classes like Political Debates in Archaeology and Native American Representation in Pop Culture.

Dartmouth runs on the Quarter Plan. Students take 3 classes a term and must complete work in 8 distribution areas. “D Plan” says that students must be here for the summer quarter after sophomore year. In exchange, they take off a quarter of their choosing during sophomore or junior year. Our tour guide loves this; students can get internships more easily during their time off. During the summer on campus, they get to know others really well, they can “test run” leadership positions in organizations, and “it’s the best weather of the year.”

When I showed up for the tour, I was told that I was not allowed to attend the Student Forum, open only to prospective students so they could ask questions without adults. However, the two students at the desk were more than happy to answer questions. “One of the biggest challenges at Dartmouth is not getting involved in everything!” said one. The other told me about his favorite activities: Humanitarian Engineers and Habitat for Humanity.

The Director of Admissions stopped down for a few minutes. Although there was a slight drop-off in applications this year, they are still at about double the number from 10 years ago. There is a rise in diversity and strength of the applicants. He called it a “crowding at the top” in terms of numbers, so nuance becomes increasingly important. They’re looking for engagement, people who are curious about their world, and those who push beyond what’s right in front of them. This can manifest itself in lots of ways: probing to real depth in academics, the way they engage peers and pushing conversation in class, getting involved in a social pursuit. About 40% of their class is admitted through the Early round. Several of these are recruited athletes and legacy students.

There are many amazing opportunities for students: 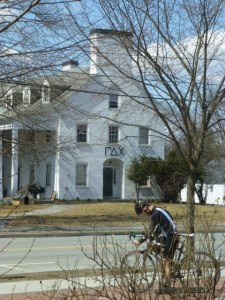 One of the Greek houses

Many dorms are Affinity Houses, and each area has clusters of first-year students. Over 90% of students live on campus all 4 years, just over half (51%) are in single rooms. There is a bit of Greek Housing, but relatively few opportunities to live in a Frat or Sorority houses. Greek Life policy delays rush to sophomore year; my tour guide said that she never expected to want to become affiliated, but she’s glad she did because it’s not at all like the stereotype. All events are open to anyone, and there are even 3 coed groups.