Getting off the bus, another counselor turned to me and said, “Well, we’re in farm country.” There was definitely a faint odor of manure in the air (which luckily seemed to be localized to the area where we got off the bus). We asked the tour guide about that; he said that once a week, they can get that odor from a local plant, but it’s rarely strong or long-lasting. He’s a senior and only twice did he remember it being overwhelming.

The University Center is one of the best I’ve seen. In addition to the usual things like food kiosks and the bookstore, they also had a full hair salon, a bank branch, and several other services not usually seen in student centers. Their student ID, in addition to all the usual things it does on most campuses now (food, access to dorms), also acts as an ATM to Wells Fargo. The tour guide described the campus as being like a bowtie with the University Center as the knot in the middle of campus. 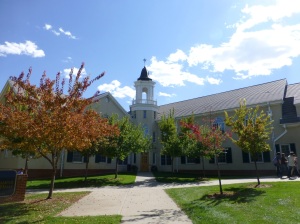 Several academic programs merited special mention: the Business department has won awards, Nursing ranks in the top 5, and Musical Theater is also a top program. The tour-guide’s class sizes range from 12 (Sociology) to 125 (Public Speaking). He really likes the “mentor feel” in which students work shoulder-to-shoulder with teachers who work hard to create place where students can contribute. They help students shape and design research, publish in journals, and present at conferences. Students talked about feeling stretched and challenged; even though it was scary and they were pushed out of their comfort zone, they grew from being here.

Outdoors activities are big (not a surprise); the university has an agreement with a local ski resort; students pay $70 for three full days on the slopes that includes ski or snowboard rentals, full-day lift tickets, and rides to and from campus. There’s also a lot to do on campus, including a full Frisbee-Golf field. The yearly “Undie Run” that happens in the spring tends to be a favorite tradition; students will meet in the quad, strip down to their undies, and run across campus. The clothes they leave are donated to Goodwill or other charity organizations.

One of the newer residential units.

UNC has 10,000 undergraduates but has the feel of a bigger school in terms of opportunities, activities, sports, off-campus options, etc. They have DI athletics which are highly participated in as well as supported by students in the stands. Club and intramural sports are also active. There are 10 fraternities and 10 sororities. Although the actual percentage of students involved in Greek life is relatively low, they do provide a lot of social activities open to the campus at large. Students said that they like the small, safe feel on campus. I asked the tour guide when the last time he knew of that the blue lights had been used, and he couldn’t think of a time. The campus is a bit sprawling but there are a lot of open spaces, and the quads were well used by the students. Even on a dreary day, people were outside. Our tour guide says that it can take 25 minutes to walk across campus, but that’s at a leisurely pace. Parking is fairly easy to find, but not necessarily close to where you need it. Everyone can have cars, and passes cost $255 a year. Most students will walk where they need to go in town; downtown is only 10 blocks away. They like having cars to get Ft. Collins (Colorado State Univ) which is only about 45 minutes away, or to go to Denver (a little over an hour). 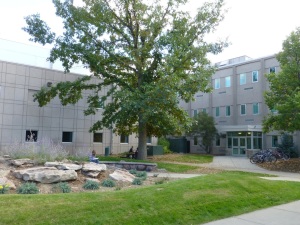 The admissions rep spoke very eloquently about making sure the students’ needs are met, even mentioning Maslow’s Needs Hierarchy. They are deliberate in designing campus and the buildings with this in mind, even to the extent that students can control their environment in the dorm rooms. “They come from a home where they’re used to being able to change the temperature; they should be able to do that here. If they aren’t comfortable, they can’t learn.”

One thought on “University of Northern Colorado”